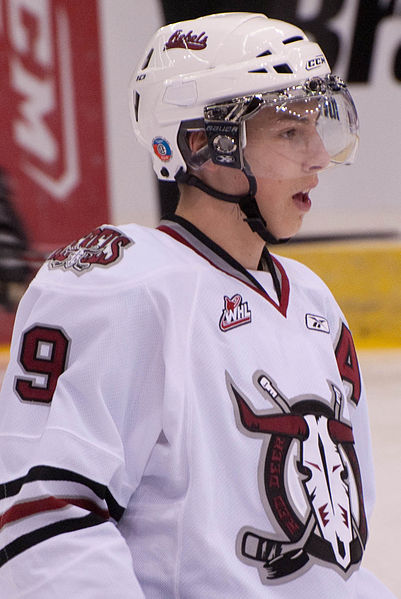 Last year, we took goalie Jack Campbell with the 17th overall selection. So did Angelique. Twice. Alas, Campbell went #11 in the real draft and the Avalanche took a player that all the blogs in the mock draft passed on in round 1: Joey Hishon. We think that worked out pretty well.

In fact, the SBN editors got a total of 5 out of 30 picks right. Taylor Hall and Tyler Seguin at #1 and #2, Mikael Grunlund at #9 to Min, Austin Watson at #18 to Nashville and Riley Sheehan at #21 to the evil empire.

Enough about last year. This year, the Avalanche have the #2 and #11 picks. The prevailing wisdom is that the Oilers will take the talented Ryan Nugent-Hopkins at #1, but leaving the Avalanche to choose from (in somewhat order of likeliness) Gabriel Landeskog, Adam Larsson, Jonathan Huberdeau and Sean Couturier. This would have been a tough decision for us, to be honest, although I think Landeskog would have won out.

But, the folks at Copper and Blue threw us a curve. They've surprised everyone by taking defenseman Adam Larsson at #1. While center is the position the Avalanche need the least, there is no way we could pass up a player many consider to be the most talented player in the draft...especially one from Burnaby. Also, we like hyphens. So, welcome to the club, Ryan Nugent-Hopkins. And we mean literally, because today we're shipping out Paul Stastny, Joey Hishon and Marek Svatos for Tyler Bozak to make room for you.

We don't think that's going to happen in real life, but, for now, you should totally buy that RNH unipron. You can follow the mock draft at SBNation's hockey hub (two picks a day) and be sure to check back here on June 14th when we reveal our equally surprising #11 pick.