For a change, the Colorado Avalanche brass did not take Canada Day off and acquired several players today (most notably Jan Hejda and Semyon Varlamov). With today's confirmed moves and predicted signings of Varlamov (~$2.75 million), Gabriel Landeskog (~$3.5 million), Ryan Wilson (~$1.5 million), T.J. Galiardi ($1 million) as well as Kevin Porter and Kyle Cumiskey (no estimates as they don't currently project to fit on the roster), the Avalanche project to be just shy of $500,000 over the cap.

That's the good news...er, the still-embarrassing-but-it-is-what-it-is news. The bad news? The roster still looks a little crowded which could be an indication that a player - perhaps a very good one - may be moved. We feared / suspected that Paul Stastny might be moved for a goalie and that certainly isn't going to happen now...but the roster is still a tad center-heavy with prospect Joey Hishon knocking on the door. 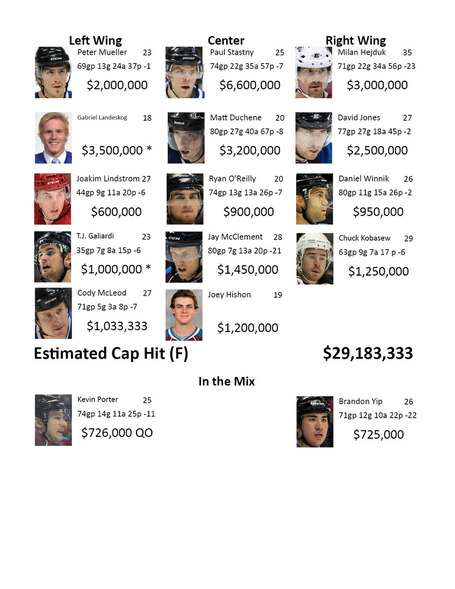 Up front, the Kobasew signing bumps Brandon Yip off of the projected roster list and leaves Kevin Porter - who was offered a qualifying offer - still on the outside looking in. 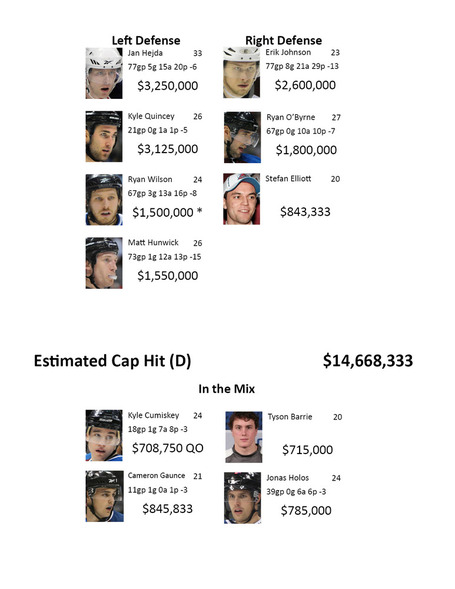 Jan Hejda becomes, for now, the 2nd-highest paid player on the team and, with 20 points, the blueliner with the 2nd most points last year. This was already a very crowded group on the lower half of the depth chart and there should be a robust battle for perhaps just one open spot on the roster in the fall.

Varlamov has not yet signed, but rumors are out there of him signing a 2-year deal for approximately $2.75 million. We'll go with that for now.

With these latest signings and projections, we're estimating that the Avalanche will be just over the cap floor in the fall. No doubt, there will still be some shuffling to do (hopefully minor, but we'll see). For now, though, we're declaring Mission 48.3 Accomplished! Now, if only we had an aircraft carrier...