Daily Cupcakes- Get to Know the Staff - Derek B

Share All sharing options for: Daily Cupcakes- Get to Know the Staff - Derek B

During the off-season, we've been getting to know you a bit more and have had awesome discussions because of this. Starting today, you can learn more about the MHH staff through a series of questions. What? It's August.

In what resembles picking short straws to see who goes first, Derek B. won the draw, and so our first in a long series of Staff interviews is none other than the seaman. What I found out about the goalie is that his idol is a goalie.

What attracted you to hockey? Does your family have a passion for it, was it always the Avalanche that you liked?

Growing up in the rural Colorado town of Pagosa Springs, the only hockey I was ever exposed to was playing video games like NHL '94. Then I found out Colorado was going to get a team called the Avalanche. From that moment, I immediately learned everything I could about the game that would soon become my passion. Pretty soon I was making room on my bedroom wall for Avs posters in the middle of all my Denver Broncos memorabilia. I watched every game I could on ESPN and Fox. I'm almost ashamed to admit it, but as a kid I kinda thought Fox's glowing puck was cool. :-)

What about MHH? How'd you find it? What kept you here? How'd you become part of the staff?  What is your favorite part of MHH?

Back in 2007 while on shore duty with the Navy in Connecticut, I worked with Brandon W. who was really into blogging. At the time he was writing for a football blog on SBN and was talking about starting Defending Big D. He asked me if I'd be willing to help him get the website started since I'm as big of a hockey fan as he is. As hesitant as was since it was Stars blog, I decided that since I always have an opinion on just about anything to do with hockey, I would do it. That was when he told me that there was even an Avalanche blog called Mile High Hockey. After going thru the pages and reading the content of the site, I couldn't believe there were other hockey fans out there that were as sarcastic as I was when it came to the "hometown team". As far as becoming a staff member, there were a lot of bribes behind the scenes which included a personalized Dead Things jersey for DDC and some Arby's sandwiches for Mike.

What are you looking forward to the most about this up-coming season?

As a goalie myself, I'm extremely excited about watching the tandem of Varly and Giggy. I'm also looking forward to seeing Landeskog and Dutchy potentially playing on a line together. Hopefully Peter Mueller can stay healthy this season and show some of the brilliance he did during the 2008-09 season.

I'm really going to be watching the Winnipeg Jets. I think the move from Atlanta back to Canada is just what this team needs and the rabid fan base they have there is going to make that team a tough win for any team when they play there.

What are some nicknames you go by?

My roommate and his girlfriend call me "D", my hockey buddies/teammates call me "D'Rock".

Your favorite player? Is there one guy that you could just watch for hours and not get bored?

My favorite player of all time is Patrick Roy. He was the reason that I myself became a goalie. I even had the incredible honor of going to his Hall of Fame induction ceremony in 2006 where I meet him, my hockey idol. 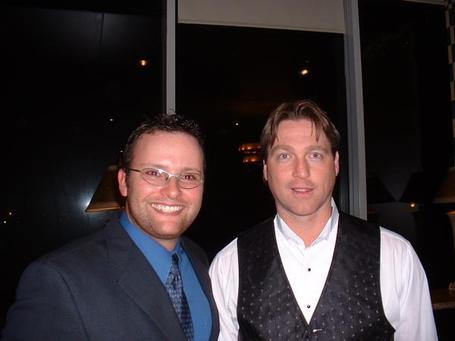 (This photo belongs to Derek on the left. )

All Star weekend yay or nay?

As a hockey fan, I really love All-Star weekend. There are not very many opportunities for the game of hockey to reach out to the casual fan, but this is one of them. With all of the young talent the NHL has, it would a shame to not showcase it as often as possible

"Patrick Roy: Winning, Nothing Else" by Michel Roy.

I don't really have a favorite, but here are the three most visited daily. Like most, I visit Facebook daily. I also frequent the SBN site dedicated Boise State football "On Bronco Nation Under God". As a pretty big Apple fan boy, I also check out "Macrumors.com" for the latest rumors on the latest gadget Apple is coming out with that I'm going to have to buy. :-)

During the offseason what is your favorite thing to do?

I'm an extremely avid golfer. I play a minimum of 36 holes every weekend and about 4-5 times total during any given week. From 2008 to 2010, I had the privilege of playing all three courses the U.S. Open was played at the year it was played there. 2008 Bethpage Black on Long Island; 2009 Torrey Pines South Course in San Diego; and 2010 Pebble Beach near Monterrey, CA.  My goal for the rest of this summer is to get myself back to a single digit handicap; I'm about a 12.2 right now.

What is your favorite hockey movie?

Slap Shot, hands down. Second would be Mystery, Alaska and then Youngblood.

The thing you want to know most about another staff member?

Two things immediately come to mind. First, what is Cheryl going to do now that Johnny Hot Pocket is no longer with the team? Second, is Sandie actually going to make it out to Colorado for a game this season? :-)

With all this Patrick Roy love, I have to wonder, do you love Murder She Wrote too? Really Derek, the glowing puck was cool? How could you even see the puck with all that glow-i-ness? So there you have it folks, you know D Rock a bit better now. Any surprised expressions while reading this? Stay tuned tomorrow for a look at another writer. Same Avs time, same Avs channel.