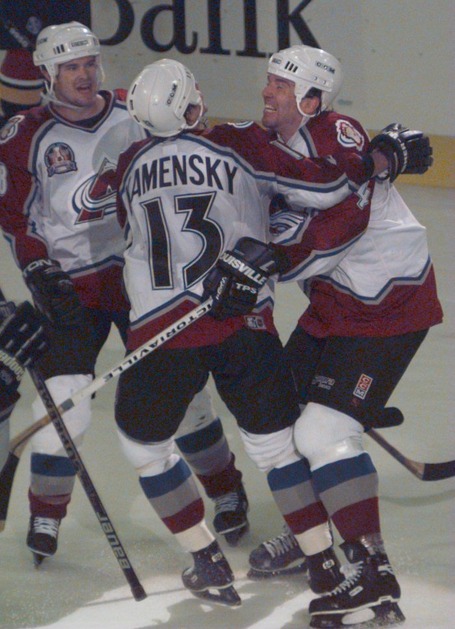 Last week, Cheryl gave us a rockin' top 10 list. I'm going to keep things going with some stats-based lists this week. And what better way to kick things off than by reeling off the Top 10 Most Lopsided Wins in Avalanche history (Colorado only), strictly from a margin-of-victory standpoint. This list will focus heavily on the glory days of the Avs, as not one of these games occurred after the lockout.

1) Colorado 12, San Jose 2. December 5th, 1995. In just the 27th game after the move to Denver, the Avalanche pasted the lowly Sharks, winning by 10 goals. Val Kamensky notched a hat trick, Peter Forsberg had 4 points, Joe Sakic and Scott Young each had 2 goals and 15 of the Avs 18 skaters had a point in the game. Sharks coach Kevin Constantine had already been fired a couple of weeks earlier and San Jose was on their way to the 2nd worst record in the league (to add insult to injury, the "prize" for this finish would be to draft  Andrei Zyuzin). Ironically, this would be the last game for a trio of Avs - Andrei Kovalenko, Martin Rucinsky and Jocelyn Thibault; they would be dealt the next day for Canadiens goalie Patrick Roy (who was the starter in 8 of the 10 games on this list).

2) Colorado 9, Vancouver 2. October 19th, 1996. Joe Sakic and Scott Young each had 2 goals (it seems I just typed that) as the Avalanche put up 9 goals on future goaltending coach, Kirk McLean. As an added bonus, the Canucks would ultimately miss the playoffs by 4 points this season.

3) Colorado 9, Vancouver 2. March 8th, 2004. This is the only road game on the list and is the most recent game to make the top 10. And, of course, it's also the ugliest game in Avalanche history (thank you, [name redacted], you pathetic buffoon). Milan Hejduk had a hat trick, Trevor Linden played in his 1,000th NHL game and Brad May (47 penalty minutes) was probably an even bigger douchebag than you-know-who. But, the most memorable event, of course, was Steve Moore carried off the ice on a stretcher in his final NHL game.

4) Colorado 8, Florida 1. June 6, 1996. It would be the last home game of the season for the Avalanche and they went out with a bang, scoring 4 goals in the first period on Florida's John Vanbiesbrouk on the way to a decisive Game 2 victory in the Stanley Cup Finals. Peter Forsberg scored a hat trick and Joe Sakic tallied 4 assists. Even Rene Corbet and Jon Klemm got into the act, each scoring a pair of goals. By the way, with the retirement of Adam Foote and Peter Forsberg, I think the only two players from the series slated to play in the NHL next year are Ed Jovanovski and Radek Dvorak.

5) Colorado 8, Chicago 1. March 22nd, 2003. While the Avalanche swept the season series against the Black Hawks this season, the previous 3 wins were all 1-goal victories. Not this time. Chicago had a rookie goalie making just his 2nd NHL start and the Avalanche roughed him up, scoring 5 goals on Craig Anderson and sending him to the showers 30 minutes in. Chicago had another hot rookie that year, but the Avs managed to keep Tyler Arnason off the score sheet. Phew! For the Avalanche, Alex Tanguay scored 3 goals and Peter Forsberg grabbed 5 of his NHL-leading 77 assists in the game.

6) Colorado 8, Edmonton 1. March 17th, 1996. This is the 3rd (and final) entry from the Avs' inaugural season. The Avalanche spread the wealth in this one with 8 different goal scorers (Joe Sakic had 4 assists). This one was over early, as the Avs put up 5 on Curtis Joseph in less than 15 minutes. Edmonton's Ryan Smyth was -3 in the game while future Lake Erie GM / Assistant Coach David Oliver skated for the Oilers as well that night.

7) Colorado 8, Tampa Bay 1. November 13th, 1998. The Tampa Bay Lightning were terrible in 1998-1999. They'd finish with 19 wins and 47 points and their leading scorer, Darcy Tucker, would muster just 43 points (a mark that 7 Avs would top that, including rookies Chris Drury and Milan Hejduk). The Avalanche were perhaps taking out a little aggravation on the Lightning, having failed to pry the #1 pick - Vinny Lecavalier - from the Lightning the previous summer. Joe Sakic led the pace with a goal and 4 assists, with Peter Forsberg and Adam Deadmarsh each potting a pair of goals.

8) Colorado 7, Chicago 0. April 24th, 1997. It was a pivotal Game 5 in the opening round of the playoffs. The series was knotted up at 2 after the Avs dropped two games in Chicago, but the Avalanche special teams dominated with five (five!) powerplay goals against future goaltending coach Jeff Hacket (and his backup, Chris Terreri, who was the starter for San Jose at #1 on this list). Valerie Kamensky scored a hat trick, Peter Forsberg and Joe Sakic each had 3 helpers and Patrick Roy turned aside all 25 shots he faced (including 5 from 35-year old Chris Chelios..still 13 years from retirement).

9) Colorado 8, Boston 2. February 21, 2001. The Avalanche have actually won 13 games by 6 goals (just one post lockout), but there's only room for two on the list, so I'm going with the two 6-goal wins where they scored the most goals. The first is Ray Bourque's first game against the Boston Bruins (he'd return to Boston with the Avs about a month later). Bourque had two assists as the Avalanche put up 6 goals on starter Peter Skudra and 2 on reliever John Grahame. Peter Forsberg had 4 points while Chris Drury and Joe Sakic each had 3 for the Avs. Even Rick Berry got in on the act, notching one of his 6 career Avalanche assists.

10) Colorado 8, San Jose 2. May 4th, 2002. Having lost Game 1 in Denver, the Avalanche roared back in Game 2 of their second round series by putting up 8 goals on San Jose's Evgeni Nabokov (who was pulled late in the game for Miikka Kiprusoff). The only Avalanche without a point that night was Bryan Muir. Rob Blake scored twice. Peter Forsberg, Milan Hejduk and Joe Sakic each had a goal along with more unlikely goal scorers Eric Messier, Greg de Vries and Dan Hinote (17 career playoff goals between them). The Avs and Sharks would continue to alternate victories until the decisive Game 7, won by the Avs 1-0.