"We're probably the biggest D-corps, or one of the biggest, in the league"

When Dater posted this quote by Shane O'Brien earlier this week, I was caught off-guard. Yeah, I know we bulked up our blueline, but biggest in the league? Come on. Still, the fact that we might be close intrigued me. So, like usual, I made a spreadsheet to find out.

I found the top 6 defensemen with at least one season NHL experience from each team based on last season's TOI and current cap hit data, then I averaged their height and weight. Since I'm not 100% sure I have the true top 6 for each team and I had to exclude rookies (with one exception, but I'm getting there), this is not exact. I'll probably take another look once teams have finalized their rosters. But as of right now, O'Brien was right.

The 2011-12 Colorado Avalanche have the largest defense in the entire National Hockey League.

Contemplate that savory little fact as you make your way over the jump.... 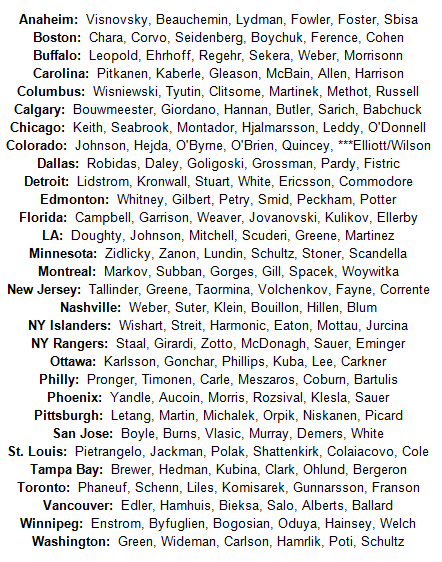 ***From what I've been hearing, Elliott actually has a chance of making the team. I included him as the 6th defenseman for the Avs, although I will also run the calculations using Wilson (who the numbers said I should pick). COL-1 is with Wilson, COL-2 is with Elliott.

So, as you can see, Sherman took this whole "make the defense bigger" thing to heart. Through trades and off-season moves, we've managed to add 2 inches and 15-20 lbs to our starting lineup in just one year. And even though some more offensive players were moved to make way for the bigger ones, our blueline still has lots of offensive potential with EJ, Elliott, Quincey, and even Hejda at the point. Add in the fact that they aren't afraid to hit (O'Byrne, O'Brien, Hejda, and Wilson had over 100 hits last season, EJ had 99, and Quincey was on pace to break 100 before he was injured), and you've got a recipe for a defensive corps that's going to take a lot of people by surprise. With any luck, the added physical nature of our team will help keep the forward healthy and the goalies safe. But either way, the Avs defense should be much more fun to watch this year.