Battle of the Blades Recap- Week 1

Share All sharing options for: Battle of the Blades Recap- Week 1 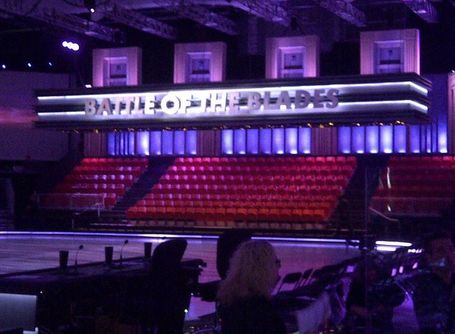 Battle of the Blades competition officially began on Sunday September 25th. This year they split the performances between the Sunday and Monday for Week 1. There was no elimination, they will be compiling the results from the first two weeks to see who will go home first. Every week there is a guest judge, this week that position was held by Darcy Tucker. Tucker liked to talk about his past experience with the players. It led to a few chuckles, and a few awkward moments.

Sunday was a night of high emotions as four new pairs took to the ice. But before the first pair could skate, Kurt Browning took to the ice and preformed a new routine to the Tune of "Moves Like Jagger" by Maroon 5. It brought the house down. The amount of pure entertainment value that man has is incredible. He can certainly move like Jagger.

The first pair to take to the ice was Brad May and Annabelle Langlois. The first thing that came to mind when I saw them, before they even skated, was that they make a better pair aesthetically than her and Georges Laraque did last year. Mayday had a bit of trouble at the beginning, looks out of place and seems to feel a bit unsure of himself with some of the hand movements until the first lift. After that, he was golden. The pair skated to Nickelbacks' "Saturday Night's Alright For Fighting" and yes, they had a few first pumps in there. The pair scored a 16.2 our of a possible 18.

Violetta Afanasieva and Cale Hulse skated to Katty Perry's "E.T.".  One thing that I noticed is that Violetta is constantly  moving her hands. She never fully stopped,and as a pair, they worked really well together. The lifts were great and they looked good whilst doing it. The judges awarded them16.6 out of 18.

The third pair of the night was Tanith Belbin and Boyd Devereauxand they skated to Our lady Peace's "Innocent" , they got a score of 16.2.

The final pair of the night is billed as "Beauty and the Beast" Marie-France Dubreuil and Bryan Berard. They preformed a great program, that was full of excitement, to the song "Rocketeer" by Far East Movement. the great skate left them with a 16.5 out of 18.

That was it for Sunday's show. Monday night offered the remaining four pairs. Now, I was at the show on Monday and had an absolute blast. Jeremy Roenick saw that I was trying to take a picture (the one above) so he did a little dance for me, yep, I got a picture of that too. Speaking of which, he really likes to dance, his head bopped up and down and he was signing along to a number of songs. Darcy Tucker said hello gave me a hug and took a quick pic, Kurt Browning saying hello, Ron McLean thanking me (you are welcome) and the night was capped off by none other than Curtis Leschyshyn skating over to introduce himself and sign my Nords and Avalanche jerseys. Because I was there in person I have a slightly different view on what happened. Once again the night started off with the Browning "Moves like Jagger" routine, only this time he was wearing hockey skates.

The night started off with Russ Courtnall. He came in to replace Wade Belak at the last minute. By the last minute, I mean two weeks before the show. Russ had been a competitor on Season 2 of Battle of the Blades and skated to the song "Hero" then, in memory of his father. Russ's father took his own life while Russ was still a young guy. His intro video was incredibly touching and certainly very sad. He was breaking up, I saw a judge fight a tear back, and there was a  lady sitting near me that had a few tears rolling down her cheek. It wasn't so much the video, which you can watch, it was the way Russ's partner Kim, who had been Wade's partner, kept talking to Russ and helping through what was obviously difficult for him. The pair skated to "Hero" by Chad Kroeger, in memory of the father that Wade's two young daughters will miss. By the end of the performance, which was well done, everybody was standing for them.  They chose to skate for the charity that Wade had wanted to win money for. When it was the judges turn to talk, Sandra the only judge with figure skating experience, was touched and had trouble getting through her spiel. She thanked Russ for stepping in and lavished him with praise.

Elena Berezhnaya and Curtis Leschyshyn were the second pair of the night, and they skated to "Animal" by Neon Trees. I thought they did very well, and their lifts were smooth and seemed effortless. They didn't get the highest score, but the judges told him that he had a great amount of potential, and he had some very, very intricate footwork. Actually, Sandra's critism reminded me a great deal of what she said to Bure last season, and Bure did end up winning, then promptly breaking, the trophy.

Third pair for the night was Marcy Hinzmann-Harris and Todd Simpson skate to "Fire" by Ragh, and their intro was pretty Darn funny. He wanted to make T-Shirts that said "Vote for Simpson, because no one knows how to spell Leschyshyn".  When they were warming up, they seemed like they were having fun. When Russ and Curtis were getting warmed up, it was all business. These two were having fun, and it showed. They did a great performance and many people in my section were up and cheering for them.

Lastly, the female hockey player took to the ice. David Pelletier and Tessa Bonhomme skate to "Hit Me With Your Best Shot" by Pat Benatar.  She has a huge following in the crowd, and she was the only one to wave to the crowd before she skated. They were unreal. The amount of faith she had in David is incredible, she did a move that Sandra , the judge, says that other women practice it for years before they are willing to try in out in competition. This is when they two male judges got a little silly, and by silly, I mean hilarious.  Roenick came out with a gem saying that if Tessa had been in NHL against him, he would have gotten a lot of "high sticking" penalties, for some reason there wasn't a huge amount of laughter at that joke, and people gave me a funny look when I was laughing at it. Then Darcy Tucker said that because Tessa was wearing a Leafs jersey, she couldn't possibly take part in the "Stanley Cup lift". Seriously, comedy gold. They got the highest scores of the night, and judging from the crowd's reaction, she will have absolutely no trouble getting the votes to stay in the competition.