On September 7, 2011, the Avalanche community lost two of its own in a tragic plane crash outside of Yaroslavl, Russia. The accident took the lives of over 40 people, most of whom were members of the Kontinental Hockey League’s Lokomotiv Yaroslavl. Karlis Skrastins and Ruslan Salei both spent time wearing burgundy and blue although they did not play together; in an ironic twist of fate, the Avs acquired Salei in a trade with the Florida Panthers for Skrastins in 2008. Reports are still coming in, but the cause of the crash is said to be mechanical in nature. The two survivors remain in critical condition.

As our hearts and thoughts go out to the friends and families of the victims, let's look back at the careers of Skrastins and Salei so that we can remember the things that made them so special. 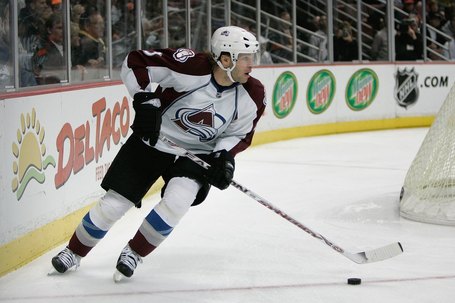 Iron Man. For most people, that name conjures images of the Marvel Comics character. To hockey fans, however, there's a different meaning: the men that play night in and night out despite the aches, pains and injuries that come with being a professional hockey player. Karlis Skrastins exemplified the ironman persona completely. Prior to February 25, 2007, Skrastins missed only one game in his NHL career. He amassed a 495-game streak, setting the NHL record for most consecutive games played by a defenseman.

What makes this streak most impressive, though, is that the Latvian native's style of play was anything but safe. He was known for getting in the way of the opposition, so much so that former teammate Ian Laperriere commented that "he's another goalie out there." Joel Quenneville, Colorado's coach at the time Skrastins set the record, said it was just him, his "thought process" to block shots and take the hits of playing against the top lines without flinching. That style of play inevitably causes injuries, and Skrastins was no exception. He played with, among other things, a damaged shoulder, injured ribs, a knee which required surgery and even a broken wrist. It was never about looking good or setting records for him. "It's my way, it's the way I have to play hockey," he said.

But taking slap shots and hard checks wasn't the only rough stuff Skrastins faced. He grew up under the shadow of communism and, at 16, watched as his country gained its independence. He also spent three years playing in the Finnish league where he was passed over in the NHL entry draft time and again. His consistent, level play put him on the radar, though, and he was drafted in 1998 by the Nashville Predators 230th overall. He fought his way into the NHL and enjoyed an 11-year career.

Karlis Skrastins will be remembered as a warrior with a kind heart and positive attitude. His legacy of strength and perseverance is one that will last for years to come. He will be missed by many, especially by those who knew him best: his friends, family and teammates. He leaves behind wife Zane and daughters Karolina and Laurena. 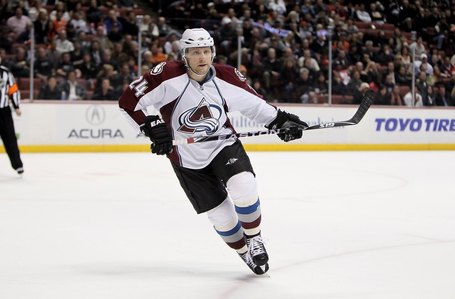 At 6'1" and 212 lbs, Ruslan Salei might have looked threatening and dangerous. However, his quick smile and friendly demeanor belied that first impression. Ryan of the Avalanche Guild echoed this sentiment when he described his first encounter with Salei a few years ago. "He...quickly revealed his keen, albeit reserved, sense of humor and an almost shockingly playful nature." Chris Foster of the LA Times experienced that sense of humor often while Salei played for the Ducks.  In an article in which he recounts numerous zingers suffered at the wit of Salei, he shared this: "My lasting thought will always be the night I was alone in a St. Louis restaurant when Rusty and two other Ducks players walked by the table. Salei stopped, kicked my chair, and said, 'I see you’re havin’ dinner with all your friends. Enjoy'." Foster admitted that "disliking Rusty was impossible."

On the ice, however, the story is a little different -- at least if you ask his opponents. The defenseman was a tough competitor who made no apologies for his rough style of play. His checks were meant to hurt the next day; his fists were meant to leave an impression. Salei was a formidable player who didn't shy away from battles.

When he joined the Avalanche midway through the 2008 season, his veteran presence and no holds barred energy helped propel the team into the playoffs and past the favored Minnesota Wild in the first round. Ducks fans will always treasure Salei as his overtime goal against the New Jersey Devils in 2003 gave 7th seeded Anaheim a fighting chance in the Stanley Cup finals by winning a critical game three. They unfortunately lost the series in 7 games, but Salei's goal will never be forgotten.

At 36, Salei's career was winding down. He planned on playing professional hockey only a few more years. He said he missed his family and wanted to spend more time with them at their home in Orange County, CA. The fact that his wife Bethann had just given birth in March to their third daughter, Ava, undoubtedly had something to do with it. Sadly, Ava won't get the chance to know her father although I'm sure her sisters Alexis and Aleksandra will tell her all about him.