Share All sharing options for: Game 48 Preview: Panthers at Avalanche 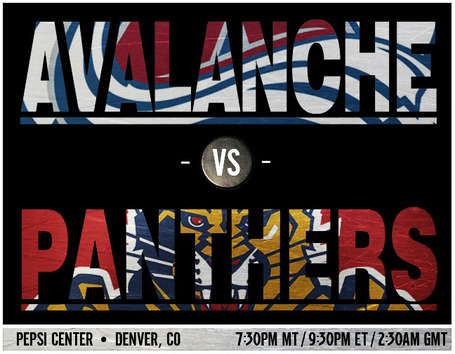 On Monday, the Avalanche faced a struggling warm-weather team in a bid to climb back into the playoff picture. As you may have heard, it didn't work out very well. Tonight, the burgundy boys get to try again as they host the Florida Panthers at the Pepsi Center. The Panthers have lost 4 of their last 5...but as tired and true Avalanche fans, you know that probably doesn't bode all that well for us.

This is an interesting matchup for a few reasons. One, these teams match up very evenly statistically. Two, the Panthers have a couple of ex-Avs in Tomas Fleischmann and Jose Theodore. Theo is day-to-day and hasn't played in the last five games...but the Panthers sent down #3 goalie Brian Foster last night, which means Theo will dress and I assume he'll start. It also illustrates a contrasting style in, uh, financial management. Panthers GM Dale Talon acquired some pricey free agents this summer while Avalanche GM Greg Sherman took the more frugal approach. It's worth noting that Tomas Fleischman, Kris Versteeg and Brian Campbell have 106 points, just 78 more than Shane O'Brien, Jan Hejda and Joaqim Lindstrom. Just sayin'...

As discussed yesterday, hopes are that O'Brien will return to the lineup tonight, forcing Joe Sacco to make a tough decision about who to sit. Personally, I'd dress Quncey just to offend his sense of entitlement.

No huge surprise that J.S. Giguere will get the nod in net over Semyon Varlamov, who struggled in his last two starts. There was a minor controversy yesterday over the fact that the Post's Mike Chambers reported that Varlamov refused comment after getting shelled by the Coyotes. Some people felt Chambers should not have made a big deal about it, while others took Varly to task for not being more professional about the interview request. Personally, I don't have a problem with either. There's nothing wrong with a player wanting to be left alone after a tough loss...and there's definitely nothing wrong with a beat writer reporting about it.

And there's nothing wrong with rooting for the Avs to get a big win tonight. For the preceding sentence, please remember to nominate me for the Worst Segue Award at the upcoming Basement Blogger People's Choice Awards. Thanks.