Share All sharing options for: Avalanche at Kings, Game 41 Preview 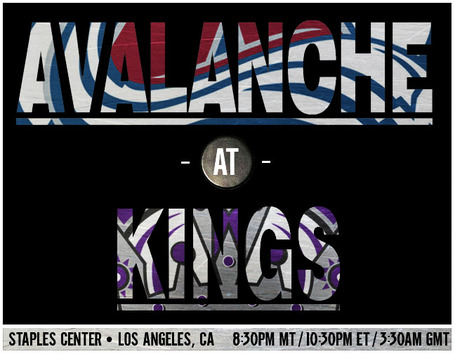 The halfway point is upon the Avalanche as they play game 41 of 82 tonight at the Staples Center versus the Los Angeles Kings. A funny story this Kings team is. Talented on offense, defense, and in net much was expected of the Kings this year, especially after the acquisition of Mike Richards from Philadelphia. Things started off rocky for LA but since firing head coach Terry Murray and bringing in Darryl Sutter, the Kings have jumped to the top of the Pacific Division and start the day 3rd in the Western Conference. Maybe there really is something to the mystical powers of the coaching change, after all.

Tonight's game is one of two teams who ended 2011 on a high note and are looking to continue their hot streaks. Compared to their recent 8-game home winning streak, the Avs current 2-0-0 record in their past 2 road games seems modest but is no less important. Colorado has gone from unstoppable on the road to unbeatable at home but their success has always been buoyed with stretches of consistent failure in one or the other. Led by another fantastic campaign by goalie Jonathan Quick (17-10-5 2.05 GAA .931 SV%), the Kings have won three straight at home, including a 4-1 drubbing over Vancouver on Saturday. Their offense has been carried by Anze Kopitar, he of 35 points in 39 games, but he has been nearly a solo act this season with the team only having 3 other players with more than 20 points scored. Dustin Penner, last year's big trade deadline acquisition, is somehow 10th on their team in points with a whopping 8 in 28 games. For comparison's sake, the offensively-challenged Avalanche have 13 players with at least 10 points.

Tonight kicks off a stretch of very important games for Colorado as their recent run against mediocre teams ends as the next 5 games, 4 on the road, feature teams that would be in the playoffs were the season to end today. If the Avs are serious about putting last season's second-half collapse firmly into their rear view mirror and pushing for a playoff spot, this is where it should start. Letting all the teams already ahead widen the gap is obviously a bad formula for success. Here's to hoping the Avs halt the Kings' momentum and continue their own.