Share All sharing options for: Avalanche at Kings, Game 49 Preview 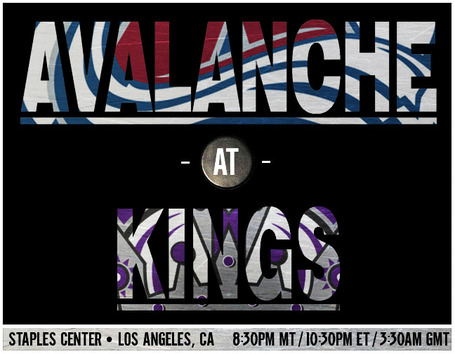 The Avalanche are back on the road after their one game stop in Denver on Wednesday where they earned a shootout win against the Panthers. The Kings are playing their second consecutive home game and are coming off a shootout loss to the Flames on Thursday. With the All-Star Break looming, Los Angeles and recent head coaching hire Darryl Sutter look to give themselves a chance to win the homestand with victories over the Avs and the visiting Sens on Tuesday. Wins in those games would push the Kings points streak to 8 games. Colorado continues the road trip in Anaheim on Sunday before returning to the Pepsi Center on Tuesday in the run up to the break (for everybody except Gabriel Landeskog of course).

Seventh-place LA sits 4 points ahead of the Avs, but only 1 point behind 3rd place San Jose who holds the slim lead in the Pacific Division. Meanwhile, Colorado is looking up at Vancouver (up 8 points) who hold down the NW Division throne and 2nd Playoff spot. The Avalanche has a bevy of playoff suitors nipping at their heels as swooning regressing Minnesota is just one point back with a game in hand and Dallas is right behind them with three games in their favor. Right there with them in the Annual Western Conference Playoff Logjam is Calgary and Phoenix although Jewels From The Crown contends that it isn't as bunched up as previous years. I said all that to say this: Points are important. The Avs need to come out of this Left Coast Swing with a cushion. Since the Kings are fans of giving points away under Sutter (8-1-6 since being hired), hopefully the Avs can garner at least one point out of tonight's tilt.

When the Avs and Kings faced off in the City of Angels a couple of weeks ago, the Kings fans felt they had been bamboozled by NHL officiating. LA winger Simon Gagne is still out with a concussion and the remainder of their forward corp. produces at an somewhat familiar rate to Avalanche fans (106 GF in LA, 124 GF in COL). I'm not sure what lineup changes are in store for Colorado tonight as Wilson is healthy and Hejda is available. I assume Jonathan Quick in net for the Kings and internet rumblings have Jean-Sebastien Giguere start tonight. I assume Semyon Varlamov will split duties on the 2nd half of the back-to-back tomorrow night.

Three points for everybody! Go Avalanche.