Share All sharing options for: Avalanche at Ducks, Game 50 Preview 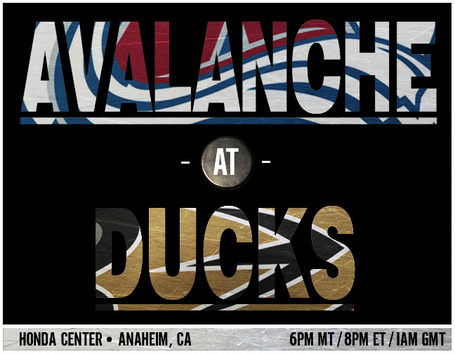 The Avalanche make their last visit to Southern California tonight as they play the Ducks at the Honda Center. The Ducks have the 3rd-worst record in the NHL, so they should be easy picking for the...oops, not so fast. Anaheim is one of the hottest teams in the league right now. They are 7-0-1 in their last 8 games, outscoring their opponents by a dominating 33-14 margin. Former Av Teemu Selanne has 44 points for the Ducks and Corey Perry has 22 goals. Not feeling all warm and fuzzy about this one. Both teams played on Saturday but neither had to travel far - Anaheim hosted (and defeated) the Senators, while the Avs were 30 miles up the road in LA.

In happier news, J.S. Giguere has never lost to his former team, going 3-0 with a .938 save percentage. As of this writing, the starter has not been named.