As you may have heard, Joe Sakic is being inducted into the Hockey Hall of Fame today.

As Avs fans, we're all very aware that Sakic is more than worthy of this high honor. His legendary career spanned 20 seasons, 1,550 games, 709 goals and 1,829 points. He's one of only 24 members of the "Triple Gold Club" after he won a World Championship (1994), an Olympic Gold (2002), and two Stanley Cups (1996, 2001). His wrist shot was feared by every goalie in the league, and he's known as one of the greatest Captains in sports history. He leads our franchise in goals, assists, and points by a wide margin, and his number #19 was raised to the rafters in 2009.

Basically, he was pretty good at this whole hockey thing.

So, in his honor (and because it seems like the thing to do 'round here), I put together a Top 19 list of some of his greatest accomplishments, a "Sakic-by-the-Numbers Countdown" if you will. As it turns out, Super Joe holds so many records that pulling this together was almost frighteningly easy. 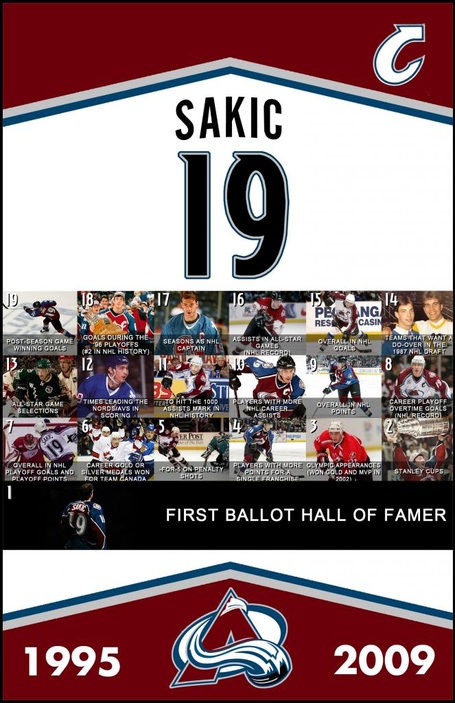 And just in case the font is still a bit too small, here's the list:

12 Times leading the Nords/Avs in scoring

5-for-5 on penalty shots

4 Players with more Points for a single franchise

Congratulations, Super Joe. If any player is deserving of this honor, it's you.