The Stupidity of Losing a Full Season

Share All sharing options for: The Stupidity of Losing a Full Season

Geometric growth. It's everything in business. If you grow by X% every year for Y years, the size of your business doesn't follow a straight line. It actually is growing faster. Losing a year of revenue takes away that year of revenue, and delays the growth curve. Let's see what that means in the context of the current foolishness in the NHL. I've constructed 2 scenarios to compare how it could have been to what it looks like it might become.

The following apply to both scenarios

For the lockout + new CBA scenario, I will make the following assumptions

So, which side wins here? Is the lockout worth it for the owners over the 7 year duration of the new CBA, or was playing under the old CBA the better situation? The suspense is killing me. On to the graph... 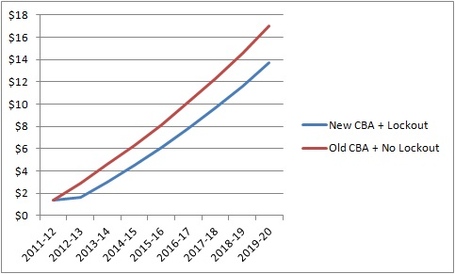 When you add it all up, the NHL owners are giving up on $3.26B in revenue between now and 2020 by staging a full season lockout to get their revenue splits down to 50%. And, this is their share of the total revenue. The league as a whole (players and owners) will have lost $11.8B. What is worse, the separation between the scenarios will continue to compound over the following years.

This is a very simple simulation, and there are a few obvious things wrong with it. For example , they may have a 15% revenue decline in the first year, but the year following may have better growth than the 7% assumption. But, the simplicity of the model makes it easy to understand that the NHL ownership is being colossally stupid in their handling of this negotiation. Who knew that the egos of a few men were worth that kind of money.

The crazy thing is that the teams that depend most on the casual fans -- and that includes all of the teams in financial difficulty today -- will be hit harder by the post-lockout indifference, so their revenue growth will start from an even lower set point than the Canadian and Original-six teams. We can expect continuing financial issues, team relocations, and probably more labor strife.