Mile High Hockey and The Sheriff team up to help PTSD soldiers!

Share All sharing options for: Scott Parker needs your help!

Scott Parker, famed NHL bare-knuckle brawler and friend of Mile High Hockey, is raising money to benefit soldiers with PTSD and he has asked Mile High Hockey and it's community to step up and help our heroes. Parker's 501 c3 non-profit organization "Parker's Platoon" is raising money for US veterans and soldiers with Post-Traumatic Stress Disorder (PTSD). This brain disorder is similar to the former Avalanche enforcer's own career-ending brain trauma. In retirement, Scott Parker has really connected with these soldiers and has made it his mission to help them not only deal with their trauma, but also heal.

The money raised will go directly to helping the soldiers by funding the training of service dogs that specialize in helping victims of PTSD cope and recover. I met one of these PTSD soldiers and his dog in Parker's Lucky 27 barbershop, and I can confirm (regardless of anyone's political leanings), that these men and women deserve and need our support, and that these special animals are truly vital in their healing process.

We make it a practice to not solicit our readers here at MHH (except for some extra Arby sauce when some muthf!*#ing drive-thru a-hole forgets to put it in the muthaf*!#ing bag!?!), but when a cause is worthy, we lend our support. Parker's Platoon has to sell 500 tickets to raise enough money to train the dogs, so please check out the message from Scott Parker below and if so inclined, call the number provided to purchase a raffle ticket to not only help our veterans, but also for a chance to win the Sheriff's custom Harley! And tell 'em MHH sent you! 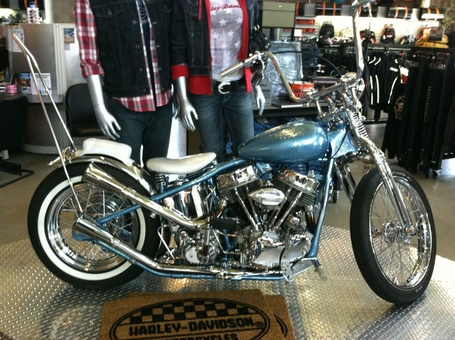