Share All sharing options for: Anatomy of a Goal: COL vs. EDM - Goal 1

I thought we'd take a look at the first goal against last night, because there has been some discussion and debate on culpability or cause. So without further comment or opinion, I offer the following: 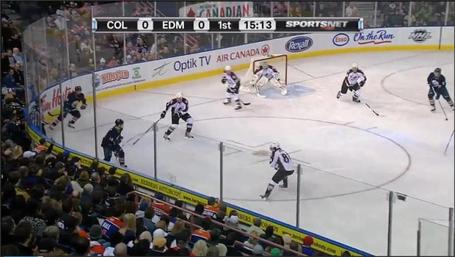 The play starts after a little bit of possession by the Oilers' line of Jordan Eberle (14), Phillipe Cornet (51), and Sam Gagner (89). The defensive pair for Edmonton on this shift is Theo Peckham (24) and Shanahan Valentine Recipient Andy Sutton (25). The Avs have the refurbished Paul Stastny line out (Peter Mueller and T.J. Galiardi on the wings) with a defensive pair of Ryan Wilson and Shane O`Brien. At this point in the shift, the puck is low in the corner on Eberle's twig as he curls up the wall. Note that Stastny is positionally responsible for fellow centerman Gagner at this point, Wilson is moving to take away Eberle's slot pass to Cornet, and SOB and Mueller are forcing Eberle up the boards toward the neutral zone. 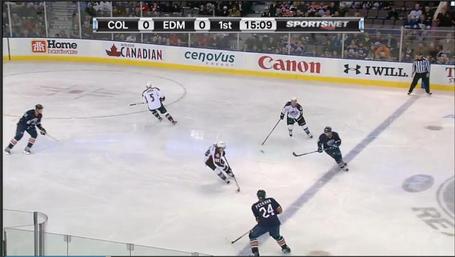 Eberle has darted to the high slot and throws a backhand back into the corner he just vacated in order to maintain possession. SOB had followed him a bit and now has curled back, effectively switching sides with Wilson who has followed Cornet to the near boards. One thing to note that I didn't get with a screen grab is that SOB and Mueller effectively pinched Eberle as he came into the slot, but both stick-checked him and nobody took the body. Eberle maintained possession and effectively reset the offensive zone. 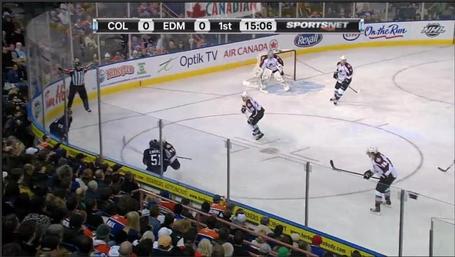 Eberle's flip pass has made it to the boards and Cornet chipped it to Gagner. Wilson is in the process of finishing Cornet into the boards. Mueller has curled back after Eberle's dump to reengage the play on the near boards. SOB is net-front as Gagner surveys the play. The stick just entering the screen on the right is Eberle's as he's curled back from the blue line and is now driving the lane left unoccupied by Mueller and Galiardi. Stastny is still in a decent position for containing Gagner out of the corner. 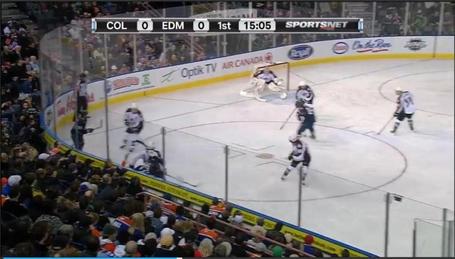 Gagner has just completed his pass to Eberle as he drives the net. SOB has taken the angle and is forcing him wide while Galiardi is in a good position to prevent the drop pass but is already too late to be effective on anything else that Eberle does unless he wraps the puck around the net. Mueller has realized he's too deep and has reversed direction to try and find the high threat which has already gotten by him. Wilson is still introducing Cornet to the NHL and has gotten a little tied up. 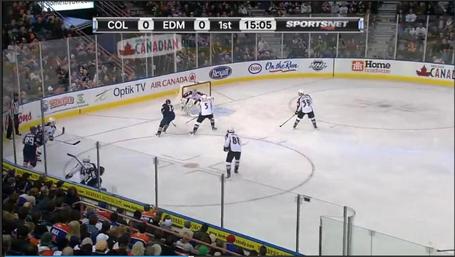 Eberle is effectively cut off from the front of the net by SOB and Gali has continued to drift lower anticipating the play switching sides. SoS and Gagner are mano y mano in the corner. Mueller has the best seat in the house. 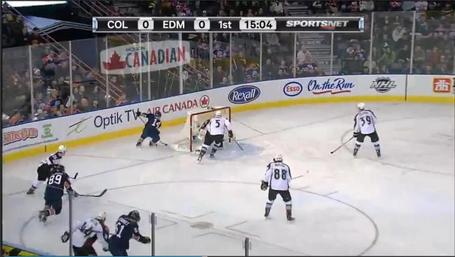 Eberle has driven toward the back of the net, SOB buys it and Semyon Varlamov has started laying down his left pad for a push across the crease to take away the wrap attempt. Gali has drifted lower, also anticipating the wrap. SoS and Wilson have their guys accounted for and Mueller is still in a zone position. At this point it's still a hat on a hat as everybody is accounted for below the circles. Eberle is right at the beginning of his cut-back. 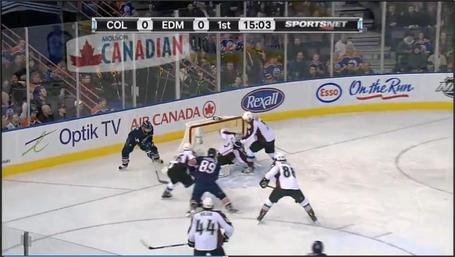 Eberle has finished his cut-back and started his near-side stuff, Varly has flashed the right leg and stopped the puck with the tip of his skate. SoS read the play and has driven STRAIGHT toward the net while maintaining position on Gagner. Mueller is a little late to the party and seems unsure of what to do. O'Brien has realized his mistake and tries to switch direction, inadvertently tying up Varlamov's right arm as he tries to stretch back across the crease. 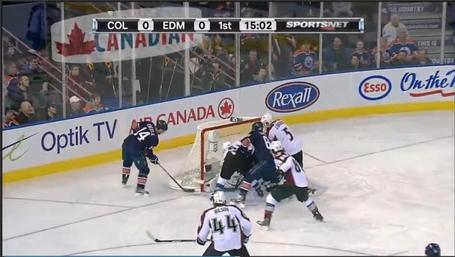 Eberle's second whack proves to be enough as Stastny is too preoccupied by Gagner's presence to take Eberle out of the play or get a clearing stick on the puck. Mueller still hasn't done much at this point. O'Brien and Varly are fully entangled at this point. 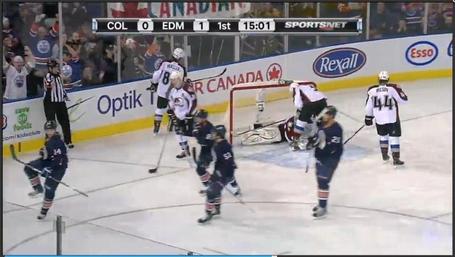 Post goal you can see how badly SOB and Varly got tangled as he's still tied up on the far side of the net and Stastny has knocked the net off with a push from Gagner. Wilson and Mueller finish their drive-by's as the Oilers celebrate in the corner.