Share All sharing options for: Hurricanes at Avalanche, Game 56 Preview 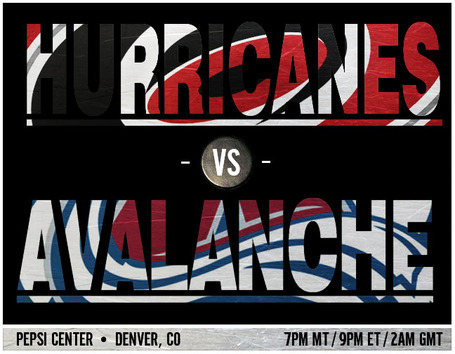 The Avs broke free from their scoring woes with Tuesday night's big win over the faltering Blackhawks and will look to continue their uphill climb towards the post season tonight as they take on the Eastern Conference worst Carolina Hurricanes.

Despite only amassing only 50 points thus far, the Canes have been coming on strong of late and are 5-2-3 in their last ten, so even when they're not winning they're still earning loser points. Speaking of loser points, Calgary and Phoenix went to OT last night before Shane Doan ended it, Dallas won, and Vancouver settled the Wild, meaning that with a win tonight the best the Avs could do is jump into 9th place.

David Jones has tallied 3 goals in his last two games. Paul Stastny is currently playing at a point per game pace as he's racked up 12 points in his past 12 games. Rookie Gabriel Landeskog leads the team in plus/minus with a +14. Plus minus is very corsi in terms of it's relevance, but when you take into account the only other current Avs sporting a positive +/- are Ryan Wilson +4 and David van der Gulik +2, Landy's +14 is pretty damn pretty.

Fun Fact: Stewart returns to Denver tonight! No, not that Stewart, the other one. Chris Stewart's brother Anthony cleared waivers this week and should play tonight if he doesn't find his under-performing self back in the minors.