Share All sharing options for: Avalanche at Blues Game 57 Preview 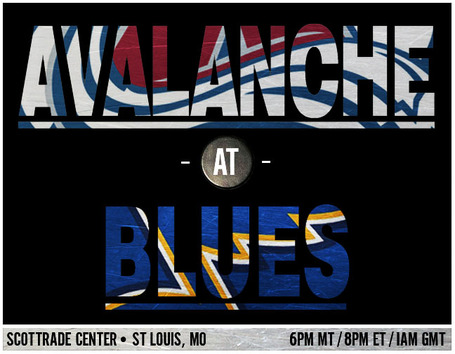 Big game. The Avs are in St Louis tonight - their 7th back-to-back out of 10 this year - in the 4th and final matchup against the Blues (and the second straight game against a Stewart brother). With a win and a Phoenix regulation loss, the Avs will pass the Coyotes and the idle Stars and move into 8th. With a loss, they could fall behind Minnesota and Calgary; both are just a point behind and are in action tonight. With the Avs looking at anywhere from 8th to 12th based on this game, we're comfortable calling it a must-win - especially as their next two games are against NW teams.

The Avs have been in better shape offensively lately, with some new guys like Paul Stastny, David Jones and Milan Hejduk arriving on the scene to make a big impact. I don't know where those three came from, but it's been great to have some secondary scoring for Gabriel Landeskog and Ryan O'Reilly.

That added offense will be needed tonight, as the Avalanche will face the superb Brian Elliott tonight (not that facing Jaroslav Halak would have been any easier - both goalies have been ridiculous this year and St Louis has 10 total shutouts). The Avs will go with Semyon Varlamov, who has three straight losses and will need a BIG game tonight. He's 3-0 with a 1.62 GAA lifetime against St Louis.

I'm sure I don't need to tell anyone that Chris Stewart and Kevin Shattenkirk have 10 points in 5 games against the Avs since the trade.

Milan Hejduk ties Adam Foote with 967 games with the franchise, #2 all-time. I guess he's not so new after all?