Even though content usually doesn't run on Sunday, I figured I'd share this with you all anyway since I promised I would. 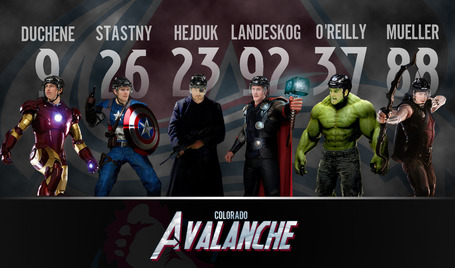 Alright, I'll admit it - I'm a nerd. Even though I wasn't big into comic books growing up, superhero movies are always some of my favorites. So, after Ryan O'Reilly's positively dominant night on Friday and his new "you won't like him when he's angry" status, I decided to weigh in on our ongoing Avalanche Superhero debate with a photoshop of my own. Since the Avengers are the hot topic right now in the movie world, I decided to compare them to just our Top Six and I was actually surprised how well the comparison worked. More details after the jump....

Matt Duchene/Iron Man: Well, first of all, Iron Man gets around via rockets on his feet. Sound familiar? Matt's speed alone makes him a natural fit. He's creative as well, able to think on his feet and come up with unorthodox ways to get the goal. He's also the flashiest of the bunch and always puts on quite a show. However, because of his pure talent he often tries to do everything by himself, but when he works with people he trusts, he's near unstoppable and creates downright havoc for the other team. Luckily Matt is a bit more humble and seemingly leads a quieter life off the ice than Tony Stark, but during combat, they find a way to bring both the razzle-dazzle and results they're known for.

Paul Stastny/Captain America: If there's one thing that Stastny and Captain America definitely share, it's their dedication to the concept of team play. They don't necessarily want to be the "hero" of the group; they're just interested in helping their team win in any way they can. Stastny's playmaking ability is a perfect example of this - he's more likely to make an amazing pass than tap home the goal himself. Both of them are also natural leaders who aren't afraid to speak up if needed, but are much more comfortable just leading by example. Add in the fact that Paul's a bit "old-timey" (he switched from a wooden stick only a couple seasons ago) and seems to have been frozen in ice for most of the past calendar year, and he's a great fit. He's also American (well, mostly), so it works out perfectly.

Milan Hejduk/Nick Fury: Even though Hejduk seems to be less of a presence on the ice this year than he has in the past, we all know who's in charge off of it. In this way, the Duke's a lot like Nick Fury - the grizzled vet keeping all of the young guys in line. Both are excellent marksmen, and both have had careers that are much longer than most. Hejduk seems to be more of a quiet leader than Fury is, but the Avs play while he's been Captain has definitely turned around. This may be Milan's last year before he passes the torch to one of the younger players, but his influence is going to have a lasting effect on this team even when he's gone. And since he was an Avalanche Captain, it's fairly safe to bet that the organization is going to try to keep him around even once he decides to hang up the skates, serving as an adviser to the team for years to come.

Gabriel Landeskog/Thor: This is a no-brainer since we started calling Landeskog "Thor" before he was even drafted. However, he's lived up to the name with his play. He is a physical force to be reckoned with on the ice - when he decides to drive to the net, he's not going to let anything or anyone stand in his way (including those pesky goalies). He also seems to really enjoy hammering anything that comes near him, whether its other players or the puck. Landy's personality fits as well since he has a charisma about him that makes him a natural leader, and even though he looks like he's 19, I'm not convinced that he's not eons old judging by his maturity. Add in the fact that he's of Scandinavian decent and has the body of a Norse God, and he's the natural choice for Thor.

Ryan O`Reilly/Hulk: I never would have come up with this one if not for Friday's game. When Radar joined the team three years ago, he was just a mild-mannered defensive-minded forward that quietly played his heart out every time he touched the ice. He's always so soft spoken and cordial in his interviews as well, just thanking the team and the fans while being extremely hard on himself. But when he's on the ice now? The second he decides to get angry, watch out. He's an offensive beast, stealing the puck and firing it on goal like there's no tomorrow. And when he doesn't score, that intensity spills over - last Friday, he slammed the door to the bench so hard I was worried he'd break it. He's not going to lay people out with big checks, but he's becoming an expert at hitting the opposition where it really hurts: the scoreboard. This sudden change of personality on the ice and it's difference to his character off of it makes him a perfect hit for the Hulk.

Peter Mueller/Hawkeye: Mueller is one heck of a sniper. More often than not, he finds a way to get the puck into the back of the net even when the shot seems impossible. The same goes for Hawkeye - the reason he's on the Avengers is his incredible shooting accuracy. Mueller and Hawkeye also share a somewhat similar history - both were originally enemies of the rest of the Avengers (Mueller was the only one one of our current Top 6 that wasn't drafted by the Nords/Avs), but eventually came around and joined the team. Neither are afraid to overcome adversity either since Hawkeye grew up on the streets and Mueller fought through almost two years of concussion issues to make it back to the lineup. Even though neither of them may be the most well-known players on their teams, but they certainly contribute in a big way to any success the group experiences.