Share All sharing options for: Avs at Canucks Preview: The Lonesome Crowded West 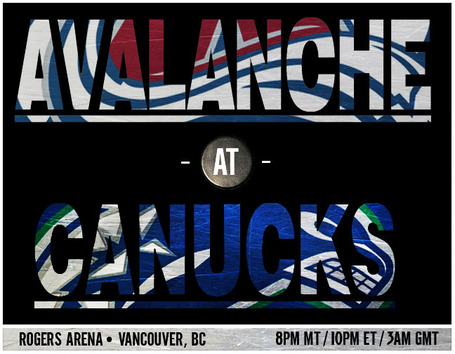 The Avalanche and Canucks meet for the 4th time this season when the puck drops tonight in Vancouver. The Nucks have won the previous 3 meetings by a combined score of 12-2, including shutting out the Avs in the first two outings. Recently, the Burgundy & Blue nearly held on for a 2-1 win before Kevin Bieksa tied the score after a fortunate bounce put the puck on his stick in the slot with 35 seconds left in regulation, and Vancouver bested the Avs in a shootout (first SO loss all season for the Avs). Tonight, the Avs will avenge that travesty.

But defeating division foes has been a major black eye on the season thus far as Colorado is a paltry 2-12-1 against the Northwest. That is the worst record for any team against their division in the entire league. Even Columbus, COLUMBUS, has a better record versus their division. In fact, only 3 western teams have a losing record against the NW: LA, Edmonton, and our Avs. If the Avalanche hope to make the playoffs, this trend must be broken tonight. I guess that translates into "must win" territory, so proceed with caution.

The Avalanche have played well over the past 3 contests snagging 6 out of a possible 8 points, and look to be heading in the right direction. Stastny and Jones are returning to form, both Jiggy and Varly are playing solid, and Duchene has joined the team on the road trip, suggesting a return to action is near. With only 25 games remaining the Avalanche will need all hands on deck to extend their season past April 7th.