Avalanche at Oilers Preview of Dread

Share All sharing options for: Avalanche at Oilers Preview of Dread 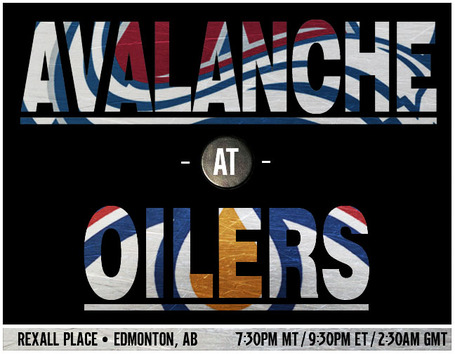 The Avs continue their 3-game Canadian road trip of terror in Edmonton tonight taking on the 2nd to last place Oilers. The Avalanche have been playing fairly well of late, but not getting the results they need to get a skate in the playoff door. Both Erik Johnson and Semyon Varlamov (1-3-0 vs Oilers) are coming off strong performances Tuesday night. Johnson in particular has been a beast the past few games and is taking the sting out of the departure of Chris GD Stewart (the "GD" now stands for "goal decline").

With only 24 games remaining, the Avs need to steal 35 out of a possible 48 points to reach the coveted 95-point playoff (somewhat) safety zone. That means they need to play better than they have all season - and actually WIN the games as well. Unfortunately, last night's NHL games went about as badly as possible with Minnesota, Phoenix, Dallas and Calgary all getting points. Seriously hating the loser points right now. The Flames and Wild were both recipients of a loser point, while Phoenix won outright, and Dallas beat Calgary in OT - that game was a double whammy of 3-point suckage. What all that chaos means is that Avs fell 5 points behind 8th place LA and slid to 11th in the West.

Colorado is 3-5-2 in their last ten. In those three wins against the lowly Hurricanes, free-falling Blackhawks, and under-performing Kings, the Avs combined for 12 goals (4 GPG). In the 7 losses, they scored just 11 times (1.57 GPG). So it seems the recipe for success is easy: score. But with Galiardi shelved with a shoulder ouchie, and Mueller and Duchene still teasing us with their likely returns, that scoring may prove to be elusive - unless recent call up Mark Olver has some amazing (hat) tricks up his sleeves. Duchene and Olver showed some chemistry together last season so here's hoping they can reignite some of that mild magic when they do find themselves back in the lineup. Olver has 9 points in 15 games this season with the Monsters for anyone who cares.

The Avs also made a few other roster moves, bringing up the recently healed Cedric Desjardins (8-5-1, 1.85GA, .941save%) to replace the more recently injured JS Giguere in net on the bench, and sending Tyson Barrie back to the AHL for more seasoning. The Avs are still very much in the hunt for the post season, but it does seem like they are kicking the tires on some of their players, perhaps evaluating/showcasing what they have and what they could move, or make moves for, in anticipation of the impending (and perennially underwhelming) trade deadline.

The Avs will finish up the road trip on Sunday in Winnipeg. Go Avs!

This preview depressed the hell outta me. TGIFUCKINGF.