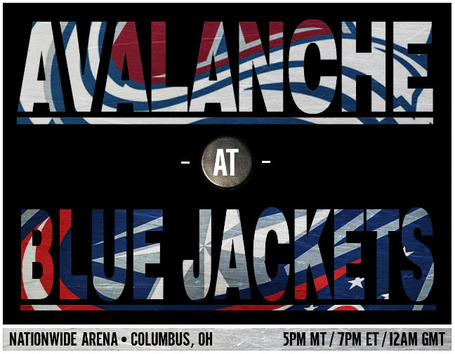 Seems the Avs always find themselves caught up in the whirlwind storylines of their opponents these days, the newest example being the Avs heading into Columbus just after the traded away prized off-season acquisition C Jeff Carter in exchange for D Jack Johnson and a conditional first round draft pick. The classic 15 cents on the dollar move by Columbus GM Scott Howson is sure to ignite some fire under an increasingly lethargic fan base. I, for one, hope they sell the game out tonight and spend all 60 minutes booing.

As for the Avalanche, this game has the stench of a classic letdown all over it. Sandwiched in between a very important, emotional win over Los Angeles on Wednesday and just before a big rivalry game in Detroit on Saturday, a Friday night tilt against lowly Columbus looks on paper to be the kind of easy win the Avalanche could really use but will botch. The question is...will the Avs show up and play a professional game and take care of business against a lesser opponent or will they act their age and play down to their competition and allow this to be a dogfight that it really doesn't need to be?

The Blue Jackets have actually made more of their last 10 games than the Avalanche, going a respectable 5-4-1, including wins over potential playoff teams San Jose, St. Louis, and Minnesota (twice, hehe) and putting themselves in a position to maybe screw up this lost season by catching Edmonton in the standings. It's still a long shot but Edmonton has seriously been that bad lately.

With the subtraction of Jeff Carter and Antonie Vermette, long-time Blue Jackets captain Rick Nash is even more alone and totally screwed than he was before. At least he'll have Vinny Prospal to keep him company until Howson sells him to the New York Rangers for Wade Redden and a boatload of 4th round draft picks. After leading scorers Nash and Prospal, their most prolific offensive player remaining is R.J. Umberger at 25 points in 55 games played, aka David Jones.

So uh...let's not get lost in the wave of Wednesday's win and the Detroit showdown Saturday and take care of business, kay boys? We really need these two points. Really really.