Share All sharing options for: Anatomy of a Goal: ANA vs COL - Goal 4

Once again, I thought we'd take a look at one of the goals from last night's game. This one being the fourth goal (third goal for!!!) because it was one of the best goals scored by this team this season in my opinion. So without further comment or opinion, I offer the following: 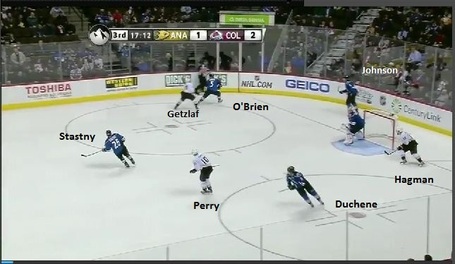 The play starts out in the Avalanche zone as Ryan Getzlaf goes for a hit on Shane O`Brien in the corner to Varly's right. SOB is going to pay the price to pop the puck up the boards and that won't show up on any scoresheet, sadly. Paul Stastny is swinging toward the boards to start the breakout. Fellow Avs forward Matt Duchene is swinging the other direction to support the exit. Anaheim's Niklas Hagman (#12) is caught deep and Corey Perry (#10) isn't at anything approaching full, meaningful speed to begin his backcheck. 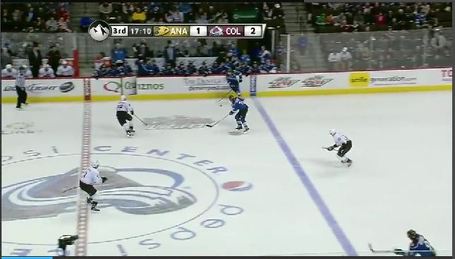 Avalanche captain Milan Hejduk is stationary and has caught SOB's clear right in front of the Colorado bench and he tap passes the puck to an in-his-stride SoS. Ducks defenseman Francois Beauchemin (#23) is attacking the puck as his defensive partner Cam Fowler (#4) is occupying a center ice position. Notice that Duchene and Perry are essentially even at this point. 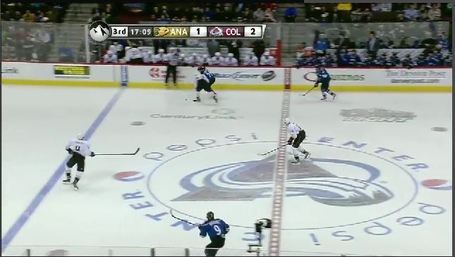 Beauchamin has now engaged Stastny as he's streaking along the benches and Hejduk has jumped into the play as a trailer. Fowler thinks his partner is going to handle Stastny so he has started to move that direction to pick up what should be a loose puck as it squirts into the zone. Duchene has now passed Perry who is eye-fucking mesmerized by the puck and has made no move to account for Duchene or deny him space. 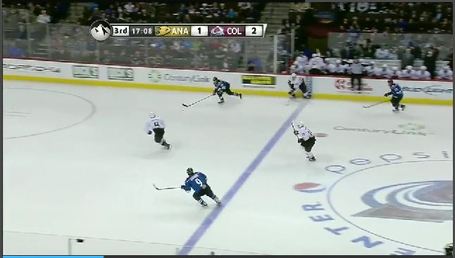 Stastny has slipped the check, effectively taking Beauchemin out of the play. Fowler has his OH SHIT moment about this time as he's realized that it's a full-blown 2-on-1. Duchene had tweaked his path a little to remain onsides as Stastny shrugged off the hit. Hejduk is still supporting and Perry is still watching from behind the play. 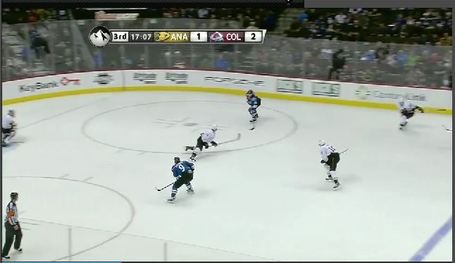 Fowler has begun his reverse Superman move as a last ditch effort to play defense for an even-farther-behind-the-play Perry. Duchene has started his glide while Stastny is still showing shot to Hiller. The stick a the edge of the screenshot is Hejduk's as he's still in trailer mode on this rush. 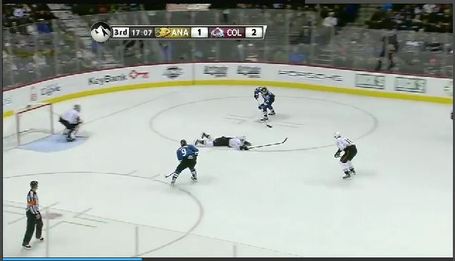 Stastny serves up a nice red roux right over the top of Fowler. Tasty on fish. Perry is still trying to use his mind bullets. 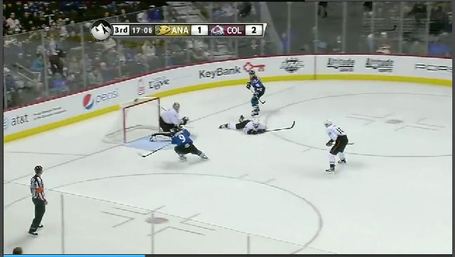 Duchene smacks it up as Hiller starts to catch on... 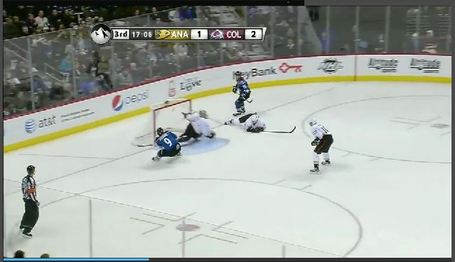 Rooftop damage! Duchene goes WAY over the top of a sprawling Hiller for the back-breaking goal of the night. Also 95% of Jonas Hiller's body has reacted, but his left arm and right hand are still waiting for Stastny to shoot. Head, hands, torso. That's the progression kids. Any other order can be painful. Perry and Fowler will have to roshambo to determine who has the best seat in the house. 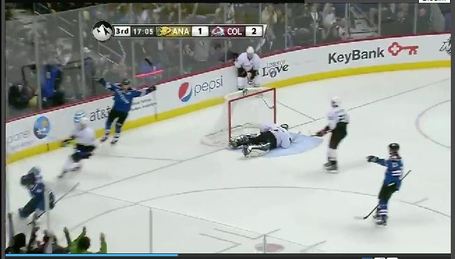