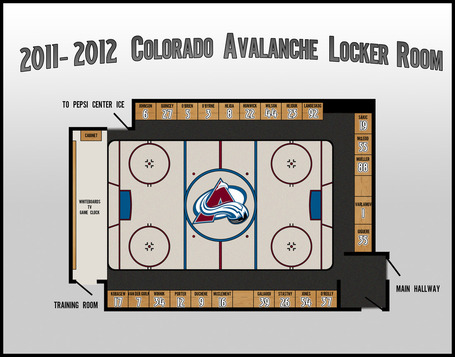 Since there was some interest expressed during the last post-game thread, I thought I'd do a little research and figure out the seating situation in the Avalanche dressing room. It wasn't exactly the easiest undertaking - there are surprisingly few pictures of this locker room and I had to rely fairly heavily on post-game interviews to see who sits next to who. I also eyeballed dimensions based off distorted photographs (seriously, does every picture of the locker room have to be taken with a fisheye lens?). Basically, all I'm saying is that this is far from perfect, but it's at least something and as correct and up-to-date as I could manage.

A few things I noticed:

* The seven defensemen sit together on the east side of the locker room (North is to the whiteboards, btw). I'm not sure what I was expecting, but it's pretty cool to see that all of the blueliners are grouped.

* Landy gets to sit right between the Captain and the Ghost of the Captain. I'm sure that's no pressure at all, especially for a rookie.

* The cabinet at the north end of the room looks like a small part of a kitchen counter. From all the photos I've seen, it typically has water cups on top of it.

* The empty locker between Mueller and Varly was just vacated by Elliott, while the other open one between Gali and McClement was formerly Yip's. One can only suppose that Barrie will get his choice, although it's more likely that he'll sit by Varly than in the middle of the forward ranks.

* I would love to know where Forsberg sat, but I can't find any pictures/vidoes of him in the locker room except for blurry and way too crowded post-Cup ones from '01. Actually, if anyone could help me out, I'd be willing to do another graphic for the '01 team. I'd be interested to know who sat where during that year.