Share All sharing options for: Blackhawks at Avalanche, Game 55 Preview 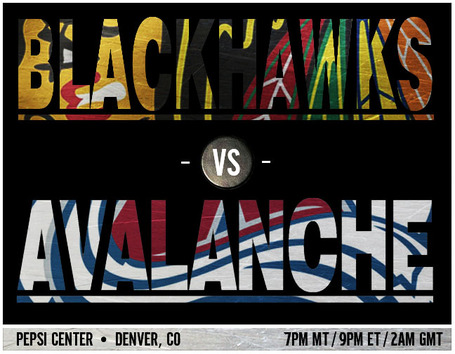 The Avalanche host the Blackhawks tonight at the Pepsi Center in what will be the 4th and final regular season meeting between the two clubs this year (the Avs have won 2 of the first 3 games). The Blackhawks have been booted from the United Center for 2 weeks by Disney on Ice, putting Chicago on a 9-game road trip. The Hawks have lost the first three and 5 straight overall, including an 8-4 loss to Sam Gagner last Thursday.

The Avalanche have also lost their last 5 games including 3 straight at home. Thank you, symmetry. Besides another inevitably disappointing loss, tonight's game will be notable for the NHL debut of Tyson Barrie. For those who dig foreshadowing, Barrie will wear the #41 last worn by Craig Anderson. Okay, that wasn't fair. I'm honestly more excited to see Barrie than I was about Elliott. I just have a good feeling about him.

Don't forget you can still find tickets for the game via the tickets link at the top of the page. And since I'm asking you to click random links, I think this would be a great time to mention that Cheryl has been really digging in and doing some great work making our facebook and twitter pages into something more than just a couple of link dumps. For those into the social media thing, I highly recommend giving both page a follow.