Share All sharing options for: Anatomy of a Goal: CHI vs. COL - Goal 5

I thought we'd take a look at the fifth goal (third goal for!!!) from last night, because it was awesome. So without further comment or opinion, I offer the following: 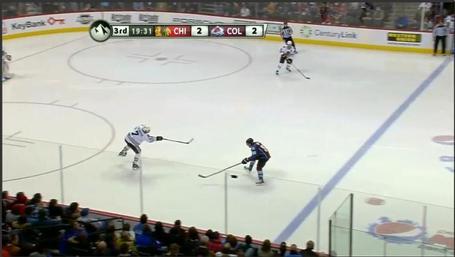 We've joined the action in progress as Peter Mueller is applying a one-man forecheck against Brent Seabrook (7) as Ryan O`Reilly's line is leaving the ice. Seabrook is trying to catch the Avs in the change and opts to pass up the middle instead of across to his defensive partner Duncan Keith (2). 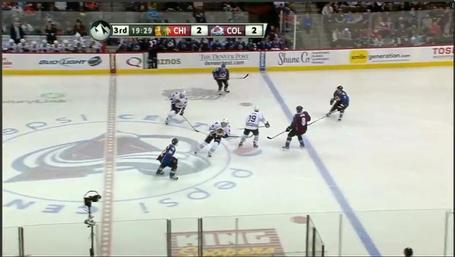 The pass makes it through the middle of the neutral zone where it is caught by Viktor Stalberg (25) who begin the o-zone entry as Jonathan Toews (19) and Marian Hossa (81) begins to swing to the far and near boards, respectively, for the zone entry. Jan Hejda has marked his man (Toews) but is preparing to drop him off to Paul Stastny who has just come over the boards. Ryan O`Byrne has read Stastny's arrival and is in a solid position as he has started his retreat from the rush. Gabriel Landeskog is back-checking and will be responsible for Hossa as the play progresses. 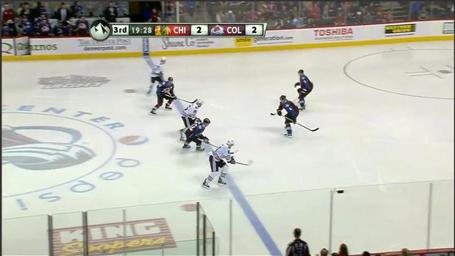 Stalberg attempts to make a short pass to Hossa at the blueline, but it is picked off by Landy. Notice that the Avs out-man the 'Hawks by a 4-to-3 count on the zone entry and the Chicago blueliners have not joined the play. 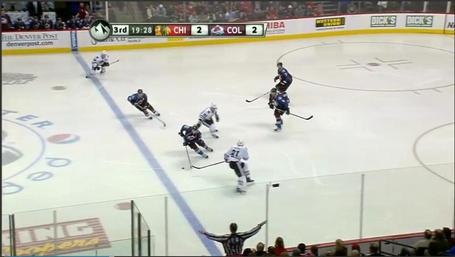 Stastny has seen the turnover and he and Landeskog are starting the counter-rush. Toews has reacted slower as his back was momentarily to the play. Hossa and Stalberg are in fly-by at this point. 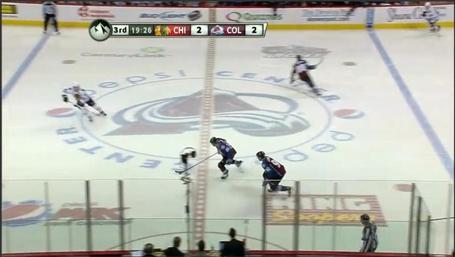 Landy has made a short, quick pass to Stastny as he's moving through the neutral zone at a better pace. Mueller has reappeared on the grid as he now turns to drive wide as his linemates are carrying the puck into the neutral zone. Keith was (assumedly) heading up ice on the now-defunct entry and is forced to turn and drive the puck-carrier wide. 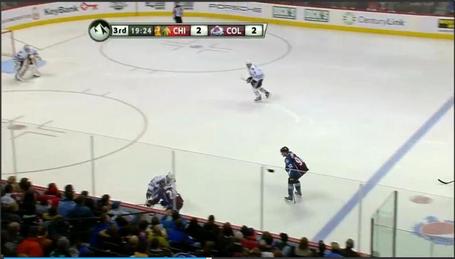 Which he does, trying to force the puck loose as Stastny carries it along the boards. Seabrook is now moving toward his net in the slot as Landy has assumed a strong lane toward the net with all the available space. The stick just entering the frame on the right is Stalberg who has recovered faster than any other Blackhawk on the ice. 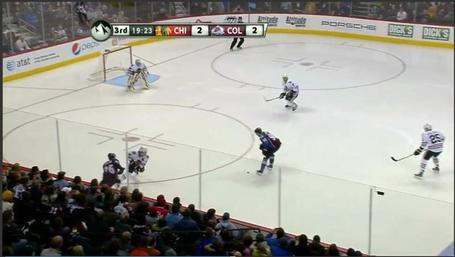 Stastny chips the puck to Landeskog as Keith has successfully cut him off from the net. Landy settles the biscuit and tees it up as he had lost some momentum and is gliding. He also has a backchecker (Stalberg) and a defenseman (Seabrook) closing down his time and space. Ray Emery has come out to a good depth and is on his angle, not showing much net at all. 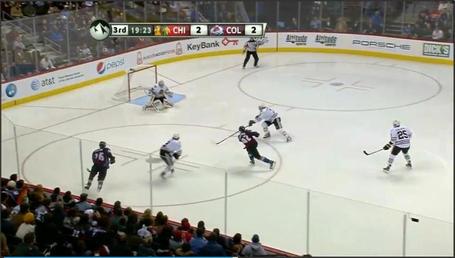 Seabrook has closed the gap and is attempting to get his stick on the shot. Keith has peeled off of Stastny who has continued on a wide path below the dot arching toward the net for any rebound. Landy has hammered the puck to the top, far corner. Emery has begun a butterfly (primarily blocking) save selection. 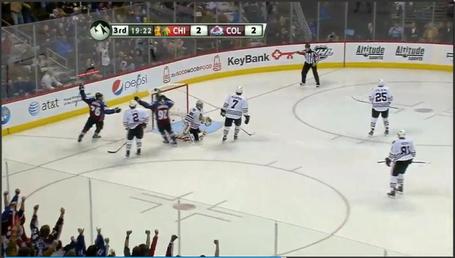 Lights on, party started! Landy's shot gets metal and then twine for the go-ahead goal. Everybody celebrate and/or coast through the goal horn... Notice that Hossa has also rejoined the play as the remainder of the Avalanche are either changing or protecting against the infamous missed-shot-on-a-great-chance-immediately-goes-the-other-way-for-a-back-breaking-goal-against.