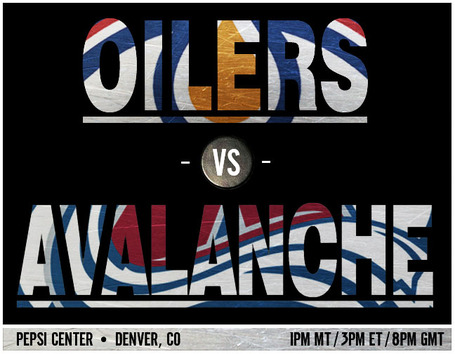 Remember that time the Avalanche played host to a team at the bottom of the standings with nothing left to play before because their GM was inept and their roster full of hilariously over-matched soon-to-be AHL players and then lost 2-0 and caused the fan base to nearly set itself on fire?

Yeah. Let's not do that again.

The Avalanche come into today's afternoon contest versus the Edmonton Oilers with just 13 games remaining on the schedule and the pressure of the playoff race only increasing with every game. The Avs, now in 11th place after Calgary's Friday night victory over Winnipeg, are still very much alive in the race for the Western Conference's final playoff spot but need to convert the opportunities given to them by the NHL schedule gods starting today.

There is no more time for moral victories, no more looking ahead to a slate of games and saying "we'll get 'em later". The Avs must make a move upwards in the standings today. They can't control all the games in hand other teams have on them and they can't control who wins or loses games they don't take a part in. Truth is, if the Avalanche just focus on winning the games they play in and controlling what they can control, they'll put themselves in a position where other teams are having to root for them to lose.

The Avalanche cannot let a Saturday afternoon home game against the hapless Edmonton Oilers slip away. They need two points. It's a must-win game. For realsies this time.