Hockey players are a special breed. Ask any of them to help out for charity, and the first thing that comes out of their mouths is, "When and where". They'll be there with a smile on their faces. This is the reaction that Colorado Avalanche's Ryan O`Byrne received from players when he mentioned he was starting a charity camp. The Ryan O'Byrne Charity Camp (ROCC) will run from August 5th-9th in Victoria, BC. The hockey camp will feature on and off-ice instructions.

This camp has been in the making for quite some time. Ryan said, "I have been wanting to do something for charity ever since I started my NHL career...(All the proceeds are) for the kids, to get under-privileged kids into sports. Obviously sports are a big part of who I am. Sports are great for kids, get some confidence, and teaches teamwork and work ethic. So, I thought, if I could help kids get into sports and have that experience it would be great."

The camp, which is aimed towards children between the ages of 9 and 12, will raise money for KidSport Victoria. The camp is aiming to get 60 kids—30 boys and 30 girls—into a high-level hockey camp. The camp will be run by professional hockey instructors, some of whom Ryan has worked with over the years, as well as some NHL players. Ryan will be very "hands on" during the camp; he'll be on the ice with the kids for all five days. Popping into the arena to lend a hand will be some other names you'll recognize: David Jones, Tyson Barrie, Jamie Benn, Manny Malhotra, and Clayton Stoner, to name a few. With all these men, Ryan plans to run a first-class camp in Victoria.

Of those sixty children, two kids will be able to attend due to the Lorelei O'Byrne Award. The scholarship is named after Ryan's mother who passed away of cancer a couple of years ago. The award will not only cover the $499 registration fee, but through the NHL Goals and Dreams, it will also outfit the two youngsters with new hockey gear. When I asked him about it, he said, "You know, losing my mom was obviously something pretty big and tough that I went through. I wanted to have her name somehow associated with the camp, and I thought this was a fitting way to pay tribute to my mom."

Like with any good team, Ryan had help realizing this wish. One of his best friends, Dylan Fraser, started helping Ryan put it all together in the summer. Unfortunately during the season, Ryan is pretty limited in what he can do. He relies on the help of his close friends and family. "When I first embarked on this, I had no idea of the scale of work involved. They are the unsung heroes. They deserve so much credit for what they've done. The charities are always supported through a name, but there is always people behind the scenes that deserve the credit." He tries to stay involved as much as possible; he spent the All-Star break in Victoria. During the break, they did the media game, the launch of the website.

Not surprisingly, he's been getting a lot of support for the camp. "Everybody I know has been writing e-mails or phoning me or texting me, saying, 'We saw or heard about your camp. We'd love to help out anyway possible.' "

I asked Ryan why hockey players are so philanthropic when compared to the other "Big Four" sports. "I don't know what it is about hockey players. I can't pinpoint it. There's a lot of good guys in hockey. We're all pretty fortunate that a lot of people helped us out along the way to get to where we are. In any league, ask any hockey player to do anything charity-wise and you'll get a 'yeah, absolutely, I'll be there no problem.' There's no pouting; there's no nothing. I'll be there, and I'll be on time. I'll have a smile on my face. I'll be happy to do it."

"That's what has made this camp so easy. Whenever I ask people, hockey guys, they say absolutely. 'Tell me anything you need.' They've been great. Hockey players are good guys."

"We just want to raise as much money as possible...We need all the help we can get." Let's all band together and give them a hand, shall we?

You can register your child, get more information, or apply for the scholarship by going to the website: ryanobyrnecharitycamp.com . Or you can donate straight to KidSport on behalf of the Ryan O’Byrne Youth Sports Society. 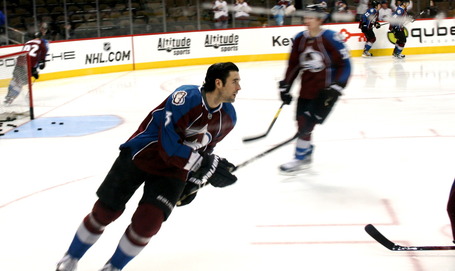