Avalanche at Sabres Preview: The Push for the Playoffs Heads East

Share All sharing options for: Avalanche at Sabres Preview: The Push for the Playoffs Heads East 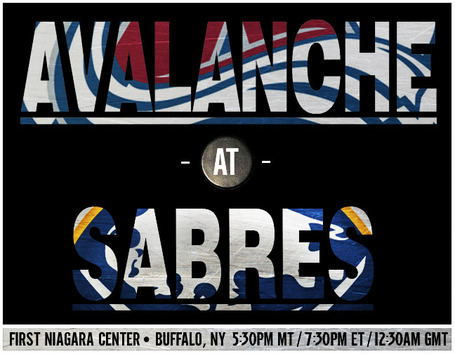 The Colorado Avalanche's push for the playoffs takes to the road tonight as the Avs take on the Buffalo Sabres to kick off a three game Eastern Conference swing. Both the Sabres and Avalanche are in tight battles for the final playoff spots in the respective conferences, and both teams are riding serious hot streaks: the Avs are 7-3-0 while the Sabres are 7-2-1 in their last 10 contests. The Avs have won the last 4 meetings between the two clubs, but Buffalo is 11-2-4 in their last 17 games at home and there's a good chance the Avs will run into a buzzsaw tonight if they're not ready when the puck drops.

Last night's NHL games couldn't have gone much worse for the Avs as four of the five teams they are battling for those final playoff spots earned points (the 5th team, Phoenix, was idle). That means the Avs dropped from 8th to 11th on their night off. Damn those games in hand. 4 teams in the wild West have 78 points. The playoff race is always insane in the West, but this demented logjam seems unprecedented.

For the Avs, Semyon Varlamov is playing like he's worth both a 1st (non-lottery bitches) and 2nd round pick. He's won 7 of his last 9 starts while allowing just 12 goals in those 9 games combined. After going scoreless in his first two games in an Avs' sweater, Jamie McGinn is scoring at a rampant pace. He's racked up 7 points in the last 5 games, and his line with Paul Stastny and David Jones has been the Avs best line lately.

O'Reilly seems to have cooled off with just one measly point in his last 7 games (he had 9 points in the 6 games before this current mini-slump). Is he perhaps nursing some kind of minor injury? Is he challenging his teammates to try to catch him for the scoring lead? Has he developed a fear of points? The rumor mill is now open. Go Avs.