Share All sharing options for: Anatomy of a Goal: ANA vs COL - Goal 3

Back by popular demand is another one of my looks at one of the goals from the most recent Colorado Avalanche game. This time we're going to take a look at a 3rd Period goal from one of the less-heralded bottom line guys. So without further comment or opinion, I offer the following: 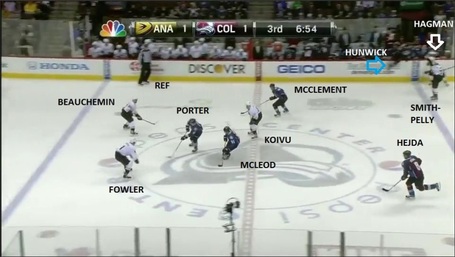 We join our action as the Avs bring the puck through the neutral zone. Kevin Porter is in the process of dumping the puck to the near side corner as Cody McLeod wheels toward that same side. Jay McClement is centering that line and is driving toward the opposite side of the zone. Anaheim Ducks defensemen Francois Beauchemin (#23) and Cam Fowler (#4) are in a decent position and carry good backward speed in front of the Avalanche forwards. The Duck in the middle of the frame is centerman Saku Koivu (#11) who has defensive responsibility for McClement. Note that the Ducks are changing forwards just behind the play. In addition, Jan Hejda is supporting the Colorado rush up the ice. His defensive partner (for this play anyway) is Ryan O`Byrne who is coming on the ice for Matt Hunwick. He doesn't factor into the play. 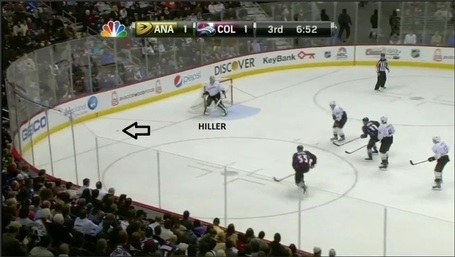 The race is on for the puck in the corner. It actually takes a decent bounce off of the end boards but stays in the no-fly zone so that Ducks goalie Jonas Hiller is locked in his crease. The race contestants are McLeod and Beauchemin. McClement is just off-screen so it appears that the Ducks outnumber the Colorado attackers 3-to-2 down low. 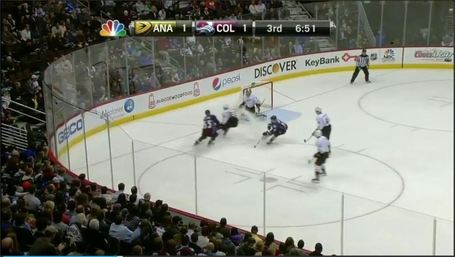 McLeod and Beauchemin reach to the puck at essentially the same time (where it sits just above the goalline). McLeod takes a whack at it but Beauchemin actually manages to one-hand it toward the near boards. Hiller reacts to the bad angle attempt by McLeod and drops into a tight, vertically sealed, blocking butterfly at his right post. Porter is applying the brakes as he sets up in front of the goal. 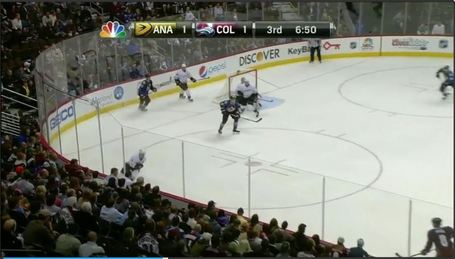 Hiller knee shuffles along the edge of the crease as the puck moves up the near boards toward a waiting Hejda. At this point, Koivu curls toward the boards to chase the puck. McLeod and Beauchemin have drifted below the goalline after their meet-and-greet. Porter is starting to develop a screen (Fowler is helping). McClement is skating toward the slot as the defensive players (including a not-yet-on-screen Teemu Selanne) plus the puck position have halved the offensive zone. He knows that O'Byrne has containment on top. 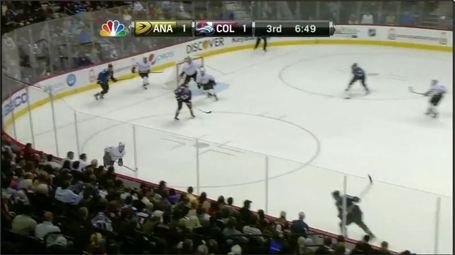 Hejda is winding up for his Happy Gilmore impression. You can see by the little change in Koivu's position that he badly under-estimated how fast the puck would get up the boards and has taken himself out of position for this shot. Note that Hiller is back on his feet and Fowler has tried to get out of his way. Hiller is standing tall trying to find the puck. Hejda actually has two pretty good options on this play: 1 - Shoot low on net for a Porter tip or rebound or 2 - slap pass to McClement who is in prime, uncontested position for the redirect. The Anaheim player just entering the screen is Selanne. Ohh, I almost forgot... Look at the screenshot above: with Hejda taking that shot, it's effectively a 3-on-1 situation. Koivu, Beauchemin, and Selanne aren't doing a thing and Fowler is on an island with Porter and McClement as legit problems, not to mention Hejda's heavy shot. 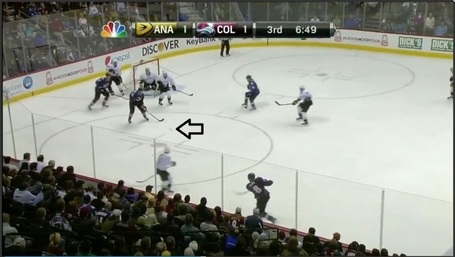 Hejda has opted for Option #1 as the shot heads toward the net. McClement is moving for the rebound and McLeod is switching to garbage-goal mode on the near side. Beauchemin is STILL behind the net in order to not screen his goalie (I guess), Fowler is protecting the family jewels and Hiller has dropped on the shot from Hejda. 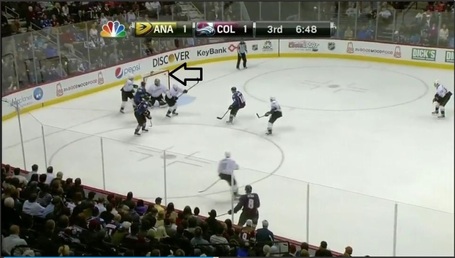 The soft, supple hands of Kevin Porter (I hear he gives great neck rubs!) have steered the biscuit toward the far corner/post. The crowd is milliseconds from hearing PING! as the puck hits iron. I think Fowler is making a half-hearted attempt at a block with his right skate/leg/asscheek, but I'm not really sure. Selanne has yet to engage McClement and Hello!!! Nik Hagman, thanks for coming! 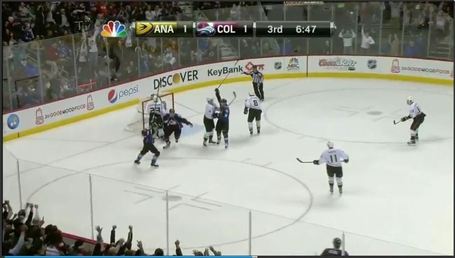 Why I do believe that light is on and the esteemed referee is pointing at something in the net! Teemu, what do you see? Make sure you explain it to Hagman, he looks confused. The hometown boys sure appear happy about whatever it is!! 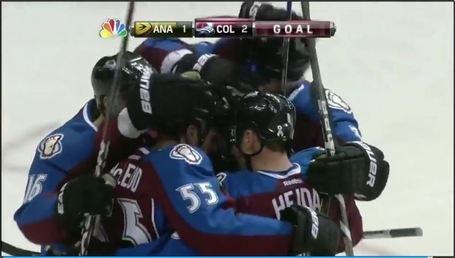