Share All sharing options for: Avalanche at Rangers: Game 74 Preview 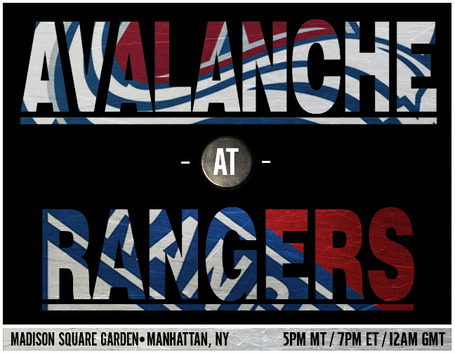 The Colorado Avalanche finish up their 3-game Eastern Conference road trip tonight against the New York Rangers at Madison Square Garden. So far, the road trip has gone fairly well with the Avs taking 3 of the possible 4 points.

The Rangers are stumbling a little bit lately going 5-4-1 in their last 10, but remain on top of the Eastern Conference. The Rangers are coming off a loss to the Sidney Crosby buoyed Pittsburgh Penguins, who are also the closest team to catching the Rangers as they are only 4 points behind NY. The Avs on the other hand continue to find ways to win games as they've gone 6-3-1 in their last 10. It would nice if Colorado would win more games in regulation, but night in and night out they're giving themselves a chance to win games one way or another, and in turn are providing themselves with a legitimate shot at the post season.

For the second game in a row, the Avs will face off against a team with a top rookie. New York rookie Carl Hagelin plays on the Ranger's top line with Brad Richards and Marian Gaborik. Hagelin probably won't be one of the three finalists for the Calder, but he's in the top 5 and deserves a mention in the discussion. Meanwhile, the Avs' Gabriel Landeskog is getting love from all over the league and internet in terms of Calder talk and will probably take home the honor if he continues down the path he's been treading all season.

Henrik Lundqvist will return tonight for the Rangers. He's missed the past few games with the flu. The Rangers are also without their captain, Ryan Callahan, and defenseman Michael Del Zotto.