Share All sharing options for: Flames at Avalanche: Game 75 Preview. Now or Never! 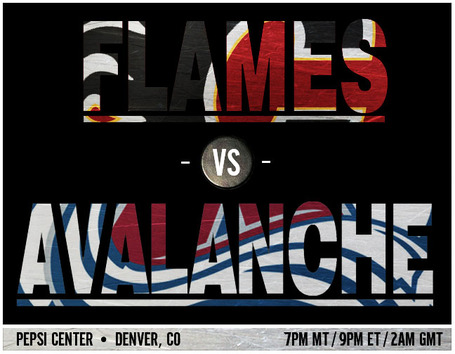 The Colorado Avalanche have played 74 games this season. None have been more important than tonight. Game 75. Versus the Calgary Flames.

The Avs and Flames are competing for the last one or two playoff spots in the West and chances are one or both teams will not make it. The Avs have been stating in interviews that they are basically already in the playoffs because each game could send them home early or keep them fighting for another day. Unfortunately for the Avs, they have been miserable against the Flames this year, losing all 4 games against. In all, the Flames have won 9 straight against the Avs dating back to last season. Time for that to trend to die.

Calgary trails the Avs by 2 points, but hold a game in hand and have one more Regulation/Overtime Win than the Avs. A regulation win by the Avs tonight would be a huge 4 point swing and do serious damage to Calgary's post season aspirations. Frustratingly, the Flames have squeezed out at least a point in 18 of their last 22 contests and seem to be perennial members in the 3-point game club.

The Flames have lost 2 in a row to teams out of the playoff picture (Thanks Edmonton!) after winning 5 straight. The Avs are returning from a 3-game road trip that saw them earn 5 out of a possible 6 points against some pretty stiff competition. The Avs continue to hold onto the 8th spot in the West for dear life and we wish to thank Anaheim for sinking the Sharks last night. Well done. 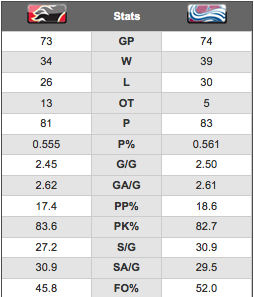 These two Northwest rivals will met again in Game 80 on March 30th, which hopefully will not be a big deal because Calgary will have fallen off the map by then. It's a fun time of year - and way better than contemplating which top draft pick Washington will be taking with their lottery pick this June. Go Avs!