Are the Colorado Avalanche Getting Jobbed by the Referees?

Share All sharing options for: Are the Colorado Avalanche Getting Jobbed by the Referees?

In the Calgary game last night, Ryan O'Reilly's nose was broken by a nasty (and likely accidental) high stick by Mark Giordano. O'Reilly was bleeding so much that they had to stop play to scrape the blood off the ice. The incident happened late in the game on a scoring attempt by O'Reilly and could clearly be seen by everyone. Everyone, that is, but the referees. It should have been a four-minute power play, but, incredibly, there was no call.

Par for the course.

The question of whether the Avs have been getting screwed by the refs this year has been a hot-button topic around these parts and I was finally badgered into taking a look at the numbers behind the perceived power play paucity. The Avalanche are on pace to earn 223 power plays this year, the lowest total by any team in at least 10 years (that's as far as I went back). Case closed. My work is done: the Avs are getting hosed. 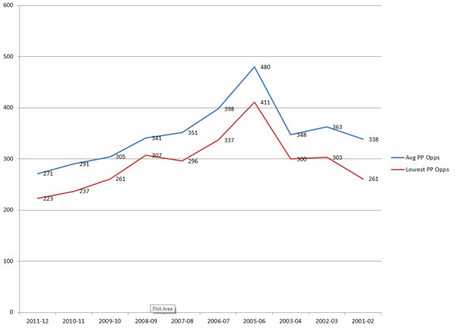 First...holy obstruction crackdown, Bettman! But, if you toss out those two post-lockout, whistle-happy seasons, you actually end up with a fairly consistent downward trend. The fact that any team - Avalanche or otherwise - would end up with just 223 opportunities is more or less right in line with the trend. Last season, a stunning 24 teams (Colorado included) had their lowest number of PPOs in the 10 years I charted. This year, 23 are on pace to set their low-water mark. Power plays are down for everyone, not just the Avalanche.

I'll leave the theories behind the league-wide fizzle to others, but I'm still curious to see if there's any reason the Avalanche are the low team on the power play totem pole. I brainstormed for all of 12 seconds and came up with a few theories as to why the Avalanche might get less opportunities. In no particular order:

I quickly ruled out #4 (the altitude). The Avs have almost the same (low) number of opportunities on the road (103) as they do at home (101). This isn't an issue that only happens in Denver.

The Tebow idea actually had a little merit. The Avalanche ranked 12th in opportunities - 2nd best in the 10 seasons I charted - in 2010, the year Tebow was drafted. Since Tebow arrived in Denver, the Avs have ranked 26th and 30th. I would like to explore this one a little more, but it's not like the Broncos are ever going to move their star QB. Right?

And, sadly, I had to dismiss the conspiracy thing...although the Devils aren't exactly a franchise loved by the league and they've had the least PPOs 3 out of the last 10 years. It's an interesting theory but I can't prove this one.

The age theory makes sense in a way. The Avs are relatively experienced and don't know how to flop to the ice as if shot from a cannon like a certain pair of forwards in Vancouver a North American team (that ranks in the top 10 for opportunities). But, the Dallas Stars is 29th lowest in PPO and they are one of the oldest teams in the NHL. Washington is also old, and will be in the bottom 5. On the flip side, Columbus and Carolina both have relatively young teams, but are in the top 5 in PP opportunities. Last year, the Devils had a league-low 237 opportunities with the 4th oldest team in the league. In short, if there's a link between age and drawing penalties, I can't see it.

So, it comes down to playing style or dumb luck and I'm going to go with a little bit of both. When the Avs are playing their game, they are getting the puck up the ice and onto the net as quickly as possible. They are not a team that is going to hold the puck for extended periods and when you don't have the puck, there's less of a chance to draw a penalty. That's not a criticism of the way they play, just a postulation that there is some cause and effect at work here. Although there are exceptions (the Calgary game being an example), I rarely feel that the Avs' opponents are getting away with a ton of penalties. On the other hand, the Avs have 18 less opportunities than the next closest team (Dallas). That's double the disparity between all other teams save the two teams with the most PPOs - Philadelphia (334) and Columbus (309). That tells me that the Avalanche have been hit by the wrong side of the lucky stick a few too many times and are probably owed a few make up calls. If any referees are reading this, Thursday might be a good time to start.

Finally, what's interesting to me is that getting hosed in the opportunity department isn't necessarily a predictor of success or failure. Check out the unlabeled chart below listing the lowest PPO team per year and the number of points each team finished with; 5 of 9 made the playoffs and Colorado - the only Western team on the list - would make it 6.

It's also worth noting that the Avs are 4-2 in games where they've had zero power plays, including a perfect 3-0 at home. That won't make Ryan O'Reilly's nose feel any better, and it won't stop anyone from screaming at the TV when an Avs' stick is somehow legally chopped in half in the same game that Mark Olver is penalized for a phantom slash. But, at least so far, the Avalanche are getting by just fine without the calls.