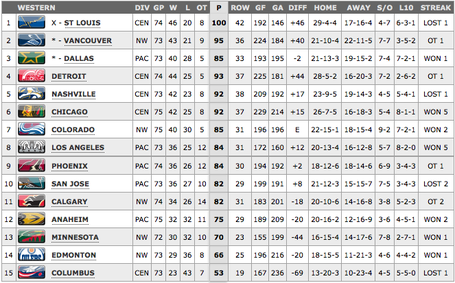 Hello. With all the excitement that is the playoff race, we here at Mile High Hockey decided to debut a new daily* post regarding said post season position jockeying to give you one place to visit each day* to see how your beloved Avalanche are shaking out. This will be a joint effort between MHH and valiant and valued community member Busted Twigg and his sexy charts (mostly we just wanted to hijack highlight his hard work and take share the credit).

For those who have not been graced with a viewing/study of Busted Twigg's charts, they take each bubble teams' record of late (previous 10 games) and project that continued trend over their remaining games to predict each teams' point total and playoff position. We'll try to update this everyday* as the Avs fight for their right to playoff hockey.

Yawn... Only one game from any of the bubble teams. The Blackhawks beat the Canucks, but their Last-10 percentages predicted it. No changes to Chicago's projections, and everyone else was idle. I was about to boot Chicago from the chart thinking their lofty projections had pulled them above the bubble, but for giggles I ran some numbers on Nashville and Detroit. Wouldn't you know it. The projected bubble is bigger than we thought. The playoff line holds at 96, but the projected final positions are interesting.

Detroit's recent swoon has dragged them back into the bubble in spite of their current point totals. If they maintain the same pace as their last 10 (2-6-2), they're back in the pile. 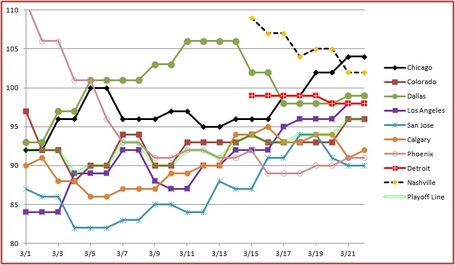 *This post is not guaranteed to post daily or in a timely fashion. This post does not claim to be accurate or care if it is accurate. This post may induce diarrhea, restless legs, and sandwich punching. Pregnant women should avoid contact with said column, and also consider naming their unborn child after Gabriel Landeskog.