The Avalanche fell from grace with the avoidable loss last night. They now sit 9th in the West. Not only did the Avs fall, but the two teams directly behind them, San Jose and Calgary, picked up points last night and inched closer to leapfrogging the youthful Avalanche. Here's where the conference stands after last night's jostling. 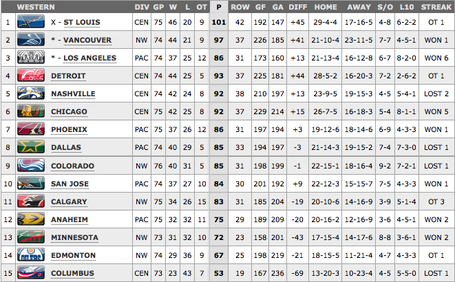 So much potential last night ...wasted. The projected final standings compressed still further. Chicago remains above the fray through the act of not playing. It seems that everyone else did what was necessary to jumble the standings. San Jose leaped upward, but without passing anyone. Los Angeles continued their winning ways, and
may be in line for the Viagra Trophy if they keep it up. Dallas has fallen far from their lofty perch, and now are down
with the rabble, scrapping for the last two playoff spots. 8th place is being decided by the second tiebreaker,
head-to-head points, which Phoenix wins (6-2). The Playoff Line has fallen back to 94 (31 ROW). 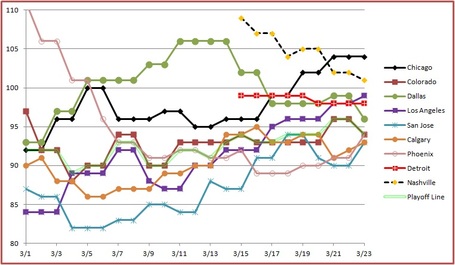