Share All sharing options for: Canucks at Avalanche, Game 77 Preview 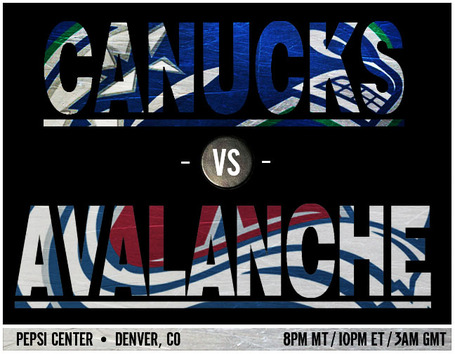 So, this is kind of important, eh? After a disastrous night on Thursday, the will try to get back into the swing of things against the Vancouver Canucks. The Avs have won 2 of the last 15 meetings against Vancouver. Ugh. Never mind the recent history, though. The Avalanche HAVE to win this game or they will have a very, very difficult road ahead of them.

To win, some Avalanche players really need to get untracked. Milan Hejduk has no goals and 3 assists in his last 19 games. Peter Mueller has one goal in his last 15 games. Matt Duchene, who did not play in the 3rd period on Thursday, has 3 points in his last 15 games. Perhaps their luck will change tonight. Hejduk and Duchene both have more goals against Vanouver than any other team (36 and 6 respectively).

The Canucks will be without one of the Swedin twins. Not sure which one, but I think it's the one with the goatee.