Share All sharing options for: Anatomy of a Goal: COL vs PHX - Goal 2

Back by c6hor8's demand is another one of my scintillating looks at one of the goals from the most recent Colorado Avalanche game. This time we're going to take a look at the back-breaking 1st Period goal against from Thursday night's game against the Phoenix Coyotes. So without further comment or opinion, I offer the following: 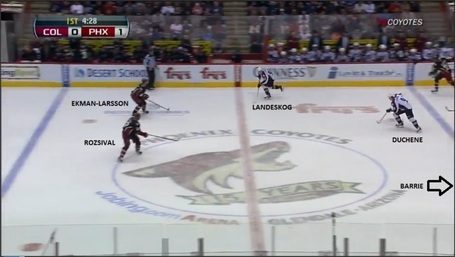 With just under 4:30 left to play in the period, a break starts out of Colorado's end. The puck is on Gabriel Landeskog's twig coming down the bench-side boards. Matt Duchene is pushing the rush and trying to get the odd-man fast break going as he streaks down center ice. Both Coyotes' defensemen (Oliver Ekman-Larsson, #23 and Michal Rozsival, #32) are in good position at this moment, even if Tyson Barrie is starting to join the rush. 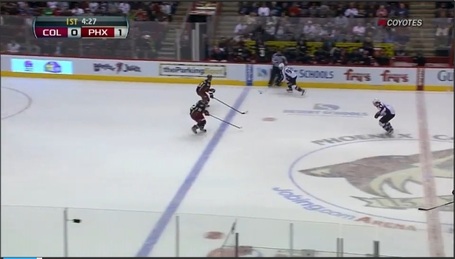 Landeskog hits the offensive blueline at full speed. This still has all the earmarks of a 3-on-1 at this point. 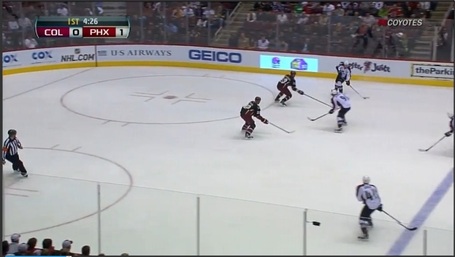 Landy has started to coast as the defensemen are compressing toward him and Duchene but a fourth Avalanche player, Shane O`Brien is supporting the play and is entering the zone to make it a 4-on-1. At this point, Landeskog has two options, Barrie or O'Brien. 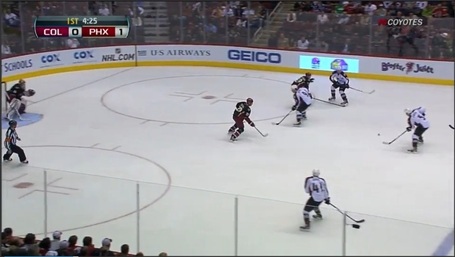 He opts for O'Brien, a play which negates Ekman-Larsson while isolating Rozsival 3-on-1. Unfortunately this is where we have our first inkling of what's to come. The stick just entering the frame of the screenshot is ageless wonder Ray Whitney (#13) who we TOTALLY should have signed in the off-season you guys. 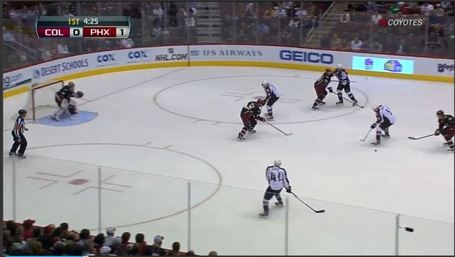 O'Brien forgets step one of receiving a pass as he flubs a Mite-level catch in his efforts to Pass Go and get directly to shooting. Landeskog is engaged with Ekman-Larsson and Barrie begins to see something he will never be able to un-see. 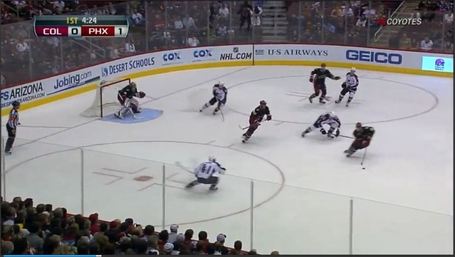 Whitney turns up ice and the math that had been in Colorado's favor a scant millisecond earlier flips like the jaded bitch she is and the Coyotes now have the advantage as the play goes the other way. All four Avs put on the brakes and I'm pretty sure Semyon Varlamov drops the Russian F-bomb. 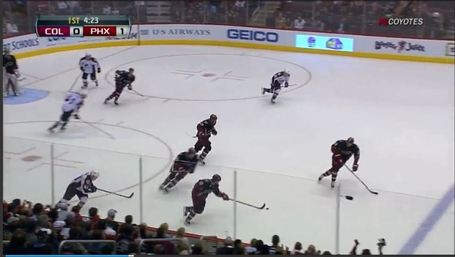 The break. It has begun. 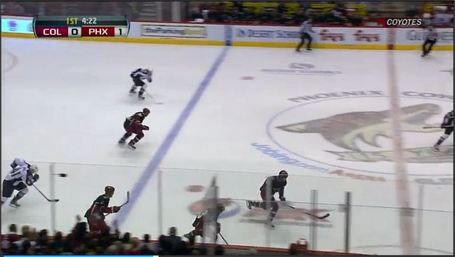 We finally get the last participant in this tragedy as Steve Downie is caught in Ohshitland (at the right edge of the screencap). The four Desert Dogs sweep through the neutral zone like a pack of mongrels on the scent. Barrie and Landeskog put their heads down and generate copious amounts of lactic acid. 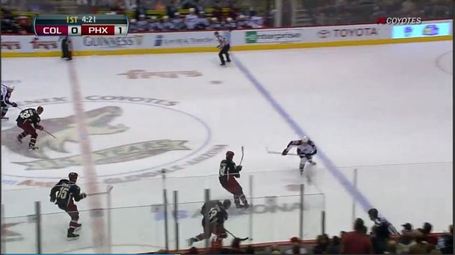 Downie commits to the the puck-carrier as he doesn't have the proper angle or speed to accelerate backwards into the defensive zone and play center field in the odd-man situation that is streaking toward him. 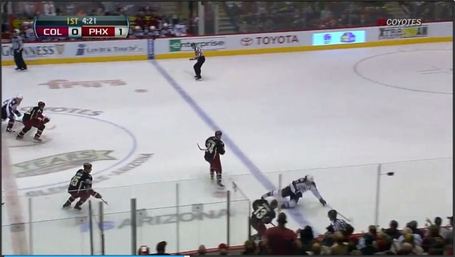 In a high-risk, high-reward maneuver (think Maverick and Goose upside-down over the Mig), Downie sells out. He slides toward Whitney hoping the young whippersnapper will panic and loose the puck and/or he (Downie) will be able to break up any passes. Or he could be going for a ridiculously blatant trip. Who knows? Whitney sees this and is about to slip a nice pass to Kyle Chipchura (#24) who is an actual hockey player and not an obscure Pokemon. 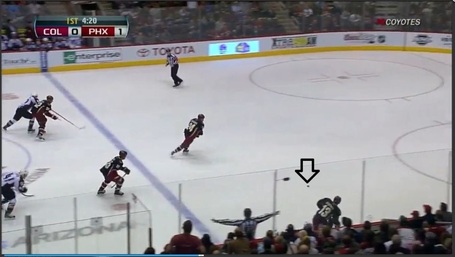 Despite the umpire calling him "SAFE!", Downie has failed to rattle Whitney, break up the pass, or trip Whitney. Landeskog and Barrie are still on their horses trying desperately to get back into the play. Chipchura's eye have lit up like a compact fluorescent and #15 Boyd Gordon is hoping to be mentioned as he supports the current 4-on-1. 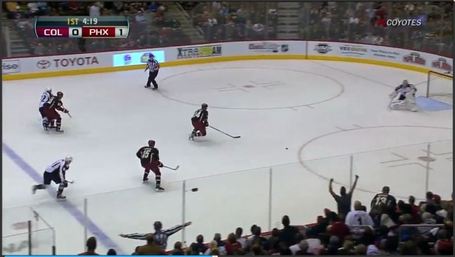 Chipchura flows to the low slot where he will meet Whitney's pass. Varlamov has come out, hit the brakes at the top of his telescoping move, and started his retreat as he knows that if he's too high, Chipchura will carry too much speed and be able to walk around him. Rozsival has boxed out Landeskog and a pre-cog on the front row has already started celebrating. 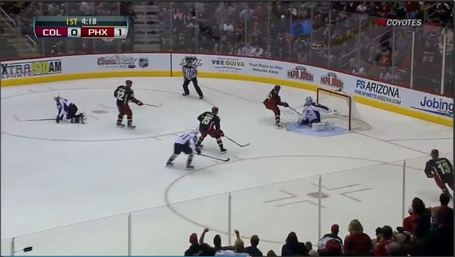 Chipchura eased on the brakes as he approached the net in order to have room to work. He half-dekes glove side to keep Varlamov in the middle of the net (since the puck had been caught stick-side) and then pulls it to his forehand. About now Barrie has realized he ain't gonna make it. 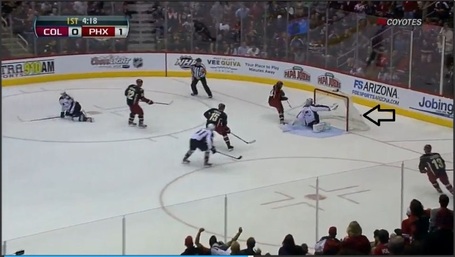 Chipchura snaps a shot just over the top of Varlamov's right pad and pops the twine. 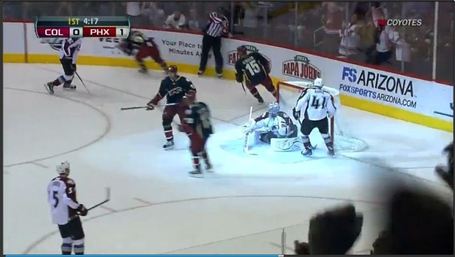 Barrie and Varlamov share an intimate moment in the spotlight as the Coyotes celebrate their second goal of the period. Shane O'Brien skates by the net and Varlamov refuses to make eye contact.