Share All sharing options for: Scoreboard Watching: Puck to the Groin Edition

That one hurt. Not much more to say about the Avs and Canucks. Colorado played well enough to win, but they didn't. Ultimately, that's all the numbers care about. All of the bubble teams were in action tonight with the exception of Chicago. Once again, this is proving to be an effective strategy as they haven't budged from their place in the projections. Just about everyone else got bumped. San Jose replaced Colorado in the tie for the 8th spot with Phoenix,, but fall to 9th because of ROW tiebreaker. Dallas regained the projected lead in the Pacific Division. Calgary now has sole possession of the bottom of the bubble. The projected Playoff Line is the only thing holding constant (other than Chicago), and it's at 94. 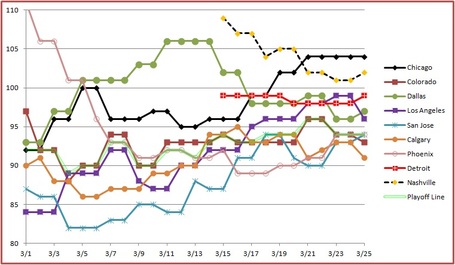 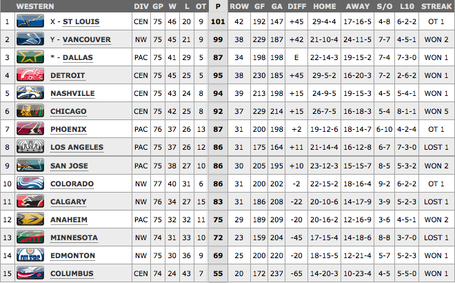