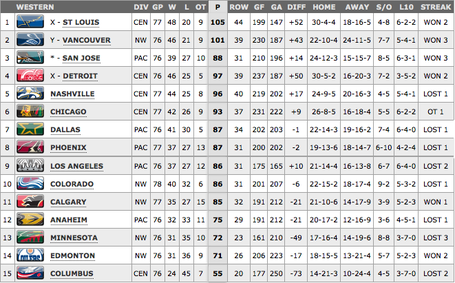 And now for some Busted Twigg....
All the action last night was either in the Eastern Conference, or near the top of the Western Conference, none of it exactly critical to the bubble. Since we're tracking everything from 3rd to 11th at the moment, we'll talk about 2 games that involve teams in that range. Nashville got fairly well stomped by St. Louis. They've fallen down into a projected tie with Detroit, who was idle (although NSH sneaks by on ROW). Chicago again made the mistake of playing a game. Their projections dropped after an shootout loss to the Devils. At this point, we have 2 distinct battles: the struggle for 4-6, and the struggle for 3, 7, 8. Both groupings are fairly tight, but separate from each other. The Playoff Line holds at 93. 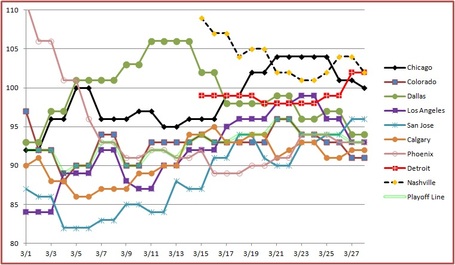 Something else that is interesting is where the Playoff Line is heading. By tracking the point values of the 8th place team since February 22, it looks like the Playoff Line will land at 95 by the end of the season (linear fit), but if we limit ourselves to the last 11 days, it looks like the rise of 8th place has slowed. A linear fit from 3/17-3/27 projects to between 92 and 93 points. Similarly, a 3rd order polynomial fit (time to change the Superman Underoos) also points to 8th place between 92 and 93. Take from it what you will. 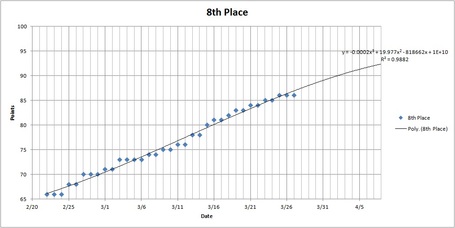