Share All sharing options for: Avalanche at Wild, Game 67 Preview 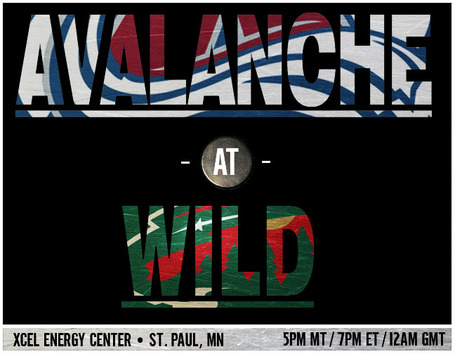 On top of a suddenly impotent offense, the Avalanche also have to deal with the loss of recent spark plug Steve Downie, who was injured in last night's loss and did not travel with the team. The extent of the injury is still unknown but the Avalanche will have to find a way to deal with the loss of a guy who has done nothing but produce since arriving in Denver. Chances are Peter Mueller's 4th line exile will come to and end and he'll see minute somewhere in the top 9 to replace him.

On the other side of the ice, Minnesota continues to hang around in the playoff race despite captain Mikko Koivu's injury issues and a dismal 3-5-2 record in their last 10 games. Still 7 points behind 8th place Dallas with just 17 games remaining, the Wild are going to have to live up to their name if they plan on making a serious push for the final playoff spot.

The Avalanche have a chance to put a serious dent in the Wild's second season dreams in the next three days if they can scratch out two victories. If Colorado can't re-discover the winning ways of last week, their own postseason aspirations are going to be in serious jeopardy.

Good news for Colorado is thanks to last night's "effort", the boys should be well-rested and full of jump for tonight's ultra mega hugely important tilt against the lovable Wild. Let's hope the Avs actually show up and somehow solve the mystery that is Avalanche-killer Niklas Backstrom. Please win. Pleasepleaseplease.

Edit: I'm dumb. Backstrom isn't playing tonight. No word on if it's Hackett or Harding tonight. According to Russo, the Avs recalled recently-acquired Mike Connolly from Lake Erie to fill the roster spot voided with the Downie injury. So far Russo is the only place I've seen that but if it's true, why is he the one breaking Avs news?