Share All sharing options for: Anatomy of a Goal: COL vs MINN - Goal 2 (PP)

We saw a great goal on the rush in our last installment, so for a change of pace I thought we'd take a look at the Avalanche power play goal from last night's rebound win against the Wild. So without further comment or opinion, I offer the following:

NOTE: This one is a little longer than the last few goals we've looked at so be prepared. Also, I wish I had something to say about the huMANGous Fox banner/scoreboard on some of these shots, but I don't. That is other than to say at least they don't shrink down the screen and aspect ratio for ads... 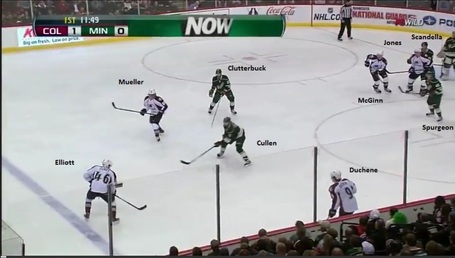 We join our power play after the face-off in the Minnesota end of the ice. Stefan Elliott has the puck on the near-side point. Peter Mueller is working his way to his far-side point, Matt Duchene is along the near wall, David Jones is camped out in front of Wild goalie-of-the-future Jeff Matt Hackett, new guy Jamie McGinn is moving to set up a double screen for a puck side shot. Matt Cullen (#7) and fan-favorite Cal Clutterbuck (#22) are the forwards in the high corners of the box penalty kill while Jared Spurgeon (#46) and Marco Scandella (#6) have defenseman duties. Note that Scandella is actively engaged with Jones here and has the better position. 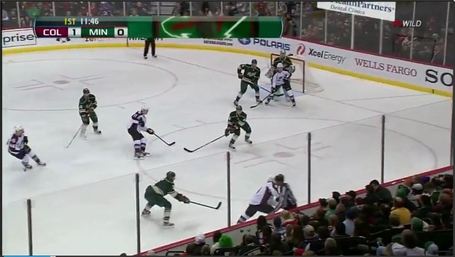 Duchene has received the pass from Elliott and has started to drive toward the corner. Cullen is charged with the puck-carrier on this side of the ice and is in pursuit while trying to take away the drop pass option. Spurgeon has tried to take away the passing lane to McGinn who has curled to a shooting position in the slot. Elliott is back-peddling toward the center of the zone. Jones has separated from Scandella slightly and has maintained the screen. 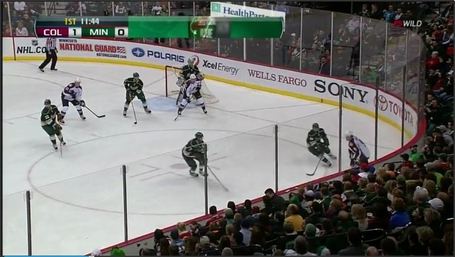 Duchene has driven to the corner and Spurgeon has engaged him positionally. Duchene is about to throw the puck back up to Elliott. Cullen has not over-committed, Clutterbuck is checking the high threats (Elliott) and Scandella has drawn the short straw trying to guard both Jones (still screening) and McGinn (far post threat) as Duchene's skating has compressed the box to less than a quarter of the zone. 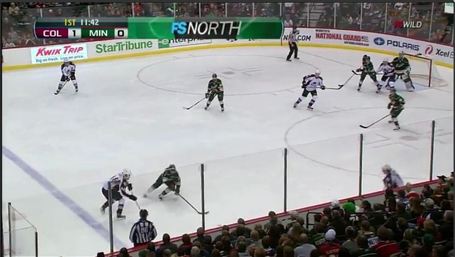 Cullen has chased the puck back up to Elliott and Duchene has followed his pass back up the boards. Elliott waits for Cullen to close the gap and taps the puck back to Duchene. Jones and Scandella are getting re-acquainted and Spurgeon is trying to get back into position. McGinn continues to circle like a shark in the low slot. Mueller awaits... 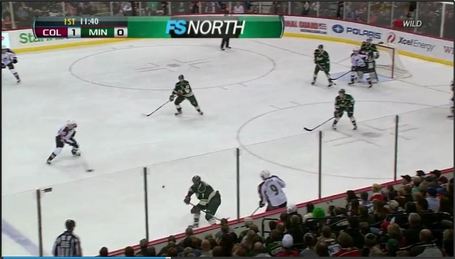 As soon as Yo-Yo Boy! Cullen engages him, Duchene flips a pass to Elliott who has drifted to a shooting position. The box is broken at this point. Clutterbuck is starting his approach to Elliott and McGinn has drifted off screen as he went to the corner. Jones continues to work the front of the net and now has the better position on Scandella. 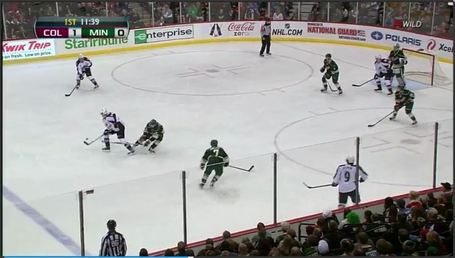 Elliott shields the puck from an attacking Clutterbuck with a nice 180 backhand to a WIIIIIIIIIIIIIDE open Mueller. Jones shifts the screen with the side-to-side puck movement. McGinn is playing hide-and-seek in the corner. 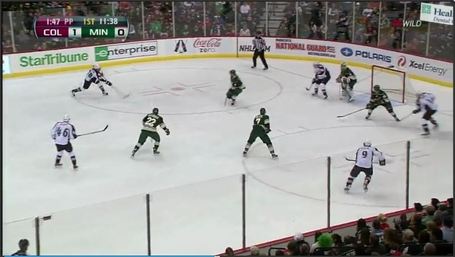 Mueller unleashes the beast as there is little traffic other than Scandella and Jones between he and Hackett. Scandella has assumed a "NOT IN THE NUTS!" blocking position. Look at McGinn and Duchene driving the slot and net respectively. 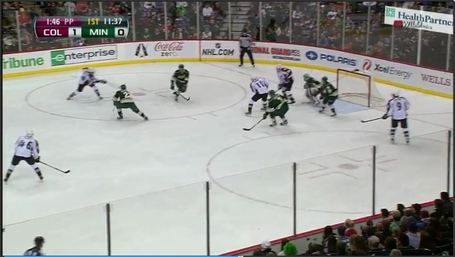 Scandella managed to get his skate/leg on the initial shot and the rebound came straight back to Mueller's twig. With zero hesitation, he lets fly again with another hard shot. Jones is setting an effective screen as Hackett is having to work to find the puck as it gets closer to the crease. Clutterbuck is gallantly trying to be useful at some point on the PK and McGinn has re-assumed his low slot position as Duchene is lurking on the backdoor. 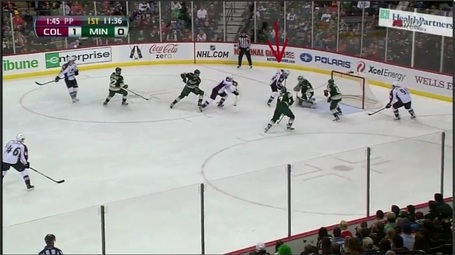 Hackett had butterflied on Mueller's second shot and had good stick discipline over the five hole, making the save. Unfortunately for him, the rebound went right to a waiting McGinn who lets fly with a quick snap shot. Jones is looking for the puck which he knows must be somewhere around there since Scandella abandoned his net position to block Mueller's initial shot. Spurgeon is still protecting the backdoor threat even though that has effectively left two unchecked Colorado players directly in front of his goalie. 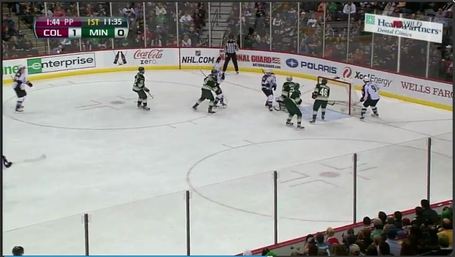 McGinn's shot beats Hackett on the short side over the blocker for Colorado's third goal in as many games. 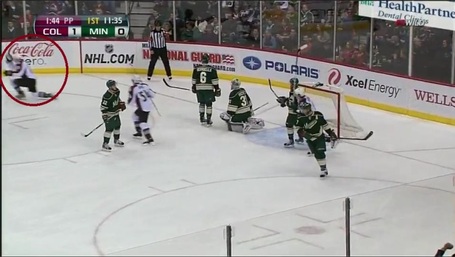 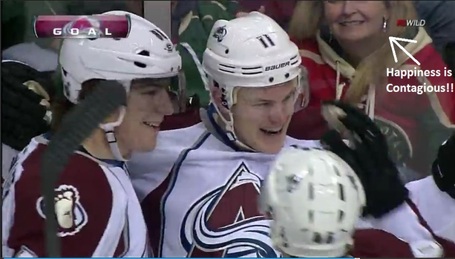 EVERYBODY HUGS!!!! Welcome to the club, Jamie.