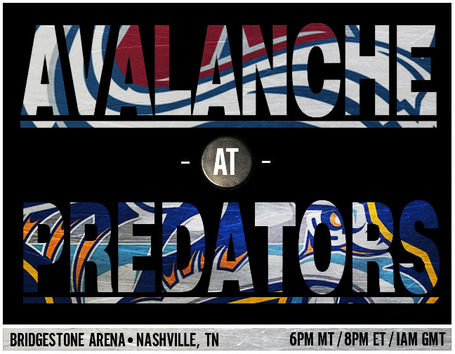 Colorado's mad dash to the end of the season continues tonight in Nashville to play a Predators team stuck in sort of a weird position in the standings. While the Avalanche are in a big ball of teams trying to make the playoffs, Nashville is in a pretty comfortable position in the standings with nobody really around to threaten them on either side.

The Predators currently in 5th place in the Western Conference and are 6 points behind 4th place Detroit and 4 points ahead of schizophrenic 6th place Chicago. With the Blues and Red Wings running away with the division in a battle the conference's top spot, Nashville sits comfortably behind in 5th place and should feel just as comfortable with the unreliable Blackhawks likely to put together any kind of sustained run to catch the always solid Predators.

6-3-1 in their last 10, Nashville comes into this game fresh off a 5-4 loss Monday at home versus the LA Kings, a game Colorado really could have used Nashville winning. On the other side of the ice, the Avalanche come in winners of 5 of their last 7 and look to build off of a dominant and utterly comical 7-1 beatdown of the pathetically inept Minnesota Wild.

If the Avs have legitimate postseason dreams, they need to continue building upon the home-and-home sweep of Minnesota earlier this week in a matchup of strength on strength as the 4th best home team in the West takes on the 6th best road team. Smart, disciplined hockey will be a key to tonight's game because any cheap penalties taken could very easily wind up in the back of the Avalanche net as Nashville sport's the league's second most efficient power play, scoring 21% of the time. If the Avs have made the proper sacrifices to the hockey gods and draw some penalties, the recent practice time spent working on the PP could come in handy against the Preds' 12th ranked PK.

Two very important points are on the line every time the Avalanche take the ice but with all of the team's closest competitors sitting with several games in hand, the Avs might just run out of chances to accrue the necessary points to make the NHL's second season. With time running out quickly for the Avs to keep pace with suddenly unbeatable Dallas, two points against a quality opponent are like so totally needed.