Anatomy of a Playoff Goal: PHI vs PIT - Goal 7

Share All sharing options for: Anatomy of a Playoff Goal: PHI vs PIT - Goal 7

I've decided that even though it appears nobody is reading these things outside of the 3,582 staff writers, I'm gonna try and keep doing these throughout the playoffs. Today's look at the physique of a goal comes from last night's scintillating choke comeback victory by the Philadelphia Flyers. We join our action in OVERTIME! as the Flyers had rallied from a 3-0 first period deficit to the Pittsburgh Penguins. The Flyers had knotted the game at 3 after Brayden Schenn's power play goal in the last half of the 3rd period. 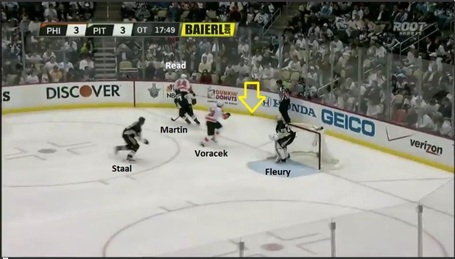 Matt Read (#24) has swooped into the left wing corner of the Penguins' zone and flipped the puck back-handed behind the net. Pitt defenseman Paul Martin (#7) had taken his lane away and forced Read to turn away from the net. Jakub Voracek (#93) is driving hard to the end boards with Pen's two-way maestro Jordan Staal (#11) right on his tail. 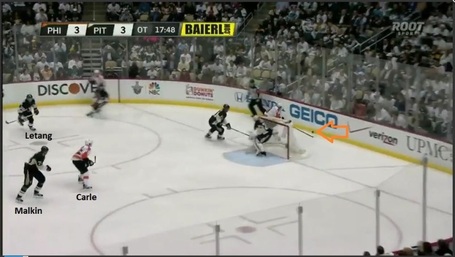 Voracek has picked up the puck and turned toward the near corner with Staal hot on his heels. Philly defender Matt Carle (#25) is supporting the play as he cruises toward the net with Geico spokesman Evgeni Malkin (#71) a stride behind. Read and Martin have started to disengage in the left corner as they both work back above the goalline. 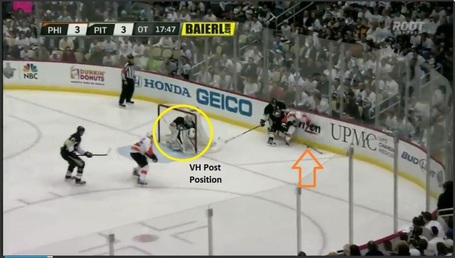 Staal tries to rub out the 6'-2" winger but Voracek fights through the check and keeps his feet moving. Carle approaches the two as it appears that Staal may pin Voracek. Malkin is still breathing down his neck. Pens' goalie Marc-Andre Fleury (MAF) has assumed a solid vertical-horizontal post position as Voracek moves from Fleury's right to his left and presents a threat of the centering pass to Carle. I'm not a fan of keeping your glove hand tucked inside the post as it opens up holes and limits that hand's mobility, but he's got good coverage for the behind-the-net play. 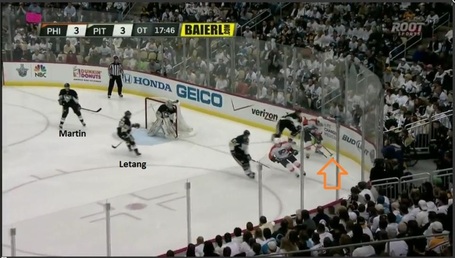 Carle has seen that Voracek has maintained possession and then he remembers that he's a defenseman so he tags up at the goalline and curls toward the boards to get back above the circles. Malkin begins to initiate a perfect Red Wings pick play to force Carle to travel up the boards. Martin and his partner Kris Letang (#58) have assumed a front-of-net presence. 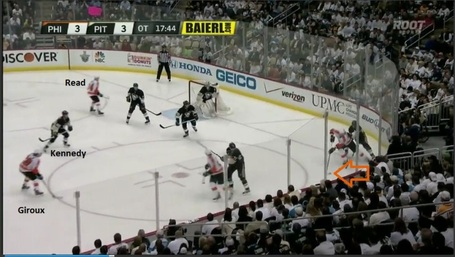 Voracek skates the puck above the goalline while Staal dry-humps his back. Staal is doing just enough titillating that Voracek can't focus in order to get a clean pass to his linemate Claude Giroux (#28) who has put himself in great position just above the circle. Pittsburg's Tyler Kennedy (#48) has also entered the play although the buffer he's given Giroux and Letang's distance from him (plus Letang's responsibility to support Staal in the corner) have given Claude a decent lane toward the net. Read has tip-toed back behind Martin who has moved to the front of the net. 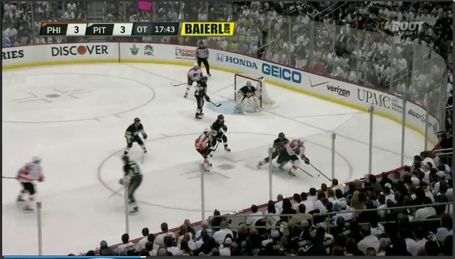 Voracek reverses just before he gets to the faceoff dot as he's not a fan of Staal's "bad touching." Carle has made it back to more familiar territory in the high zone and Malkin has disengaged him. Letang now has containment on Giroux as the play (and Giroux) have moved closer to him. Martin has front-of-net duties as he's trying to take away the passing lane from that sneaky Read kid. 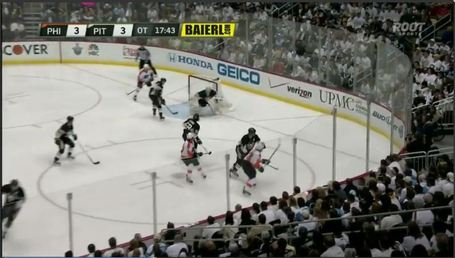 With the available square footage running out around him and the fact that Staal has tested every piece of Jakub's protective equipment with his stick, Voracek throws a backhand sweeping shot on net. 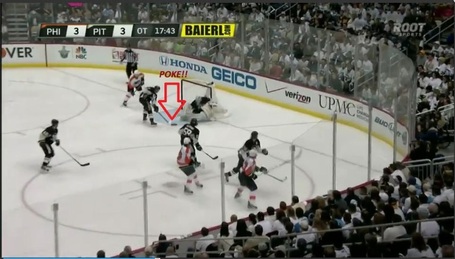 MAF half butterflies and pokes the shot with his stick as he knows the very, very sneaky Read is right behind him. 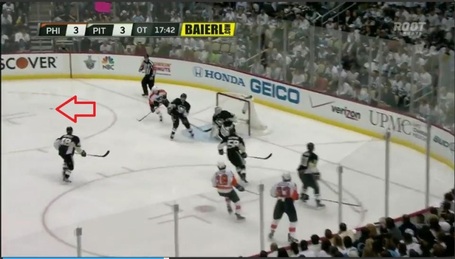 Read had a decent chance to be the hero here but Fleury's poke check punches the puck right by him! Alas, the redirected shot skitters toward the far boards... 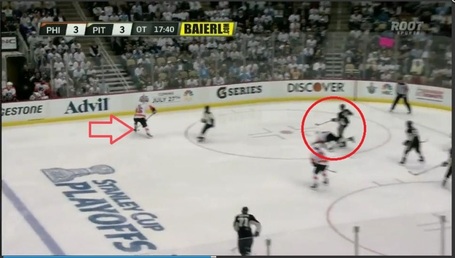 ...where Matt Carle has circled back around!! He gathers the puck like a wayward baby bird and skates toward the boards. Martin has had enough of of the other Matt's (Read) shenanigans and "accidentally" takes him out of the play. The bulk of the players are all now concentrated on the far side of the ice. The only two on the other side are effectively Staal and Voracek. The scoresheet says Andreas Lilja was on the ice too, but he must be wearing Harry's Cloak of Invisibility. 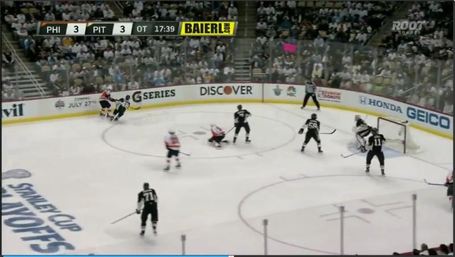 Staal has completely forgotten that this is 5-on-5 OT hockey and left Voracek behind him. Therefore, Staal goes toward the net for backside coverage (NTTAWWT). If the puck were to come to him he'd have been in great position to spring Malkin who is hovering high in the zone as it's obvious that Staal has defensive zone responsibilities of the center on this play. Carle reaches the boards and shoots low on the net as Kennedy takes away his lane. The shot causes Fleury to drop into the butterfly. Letang gets a partial piece of the shot and subtly redirects it just to Fleury's left. 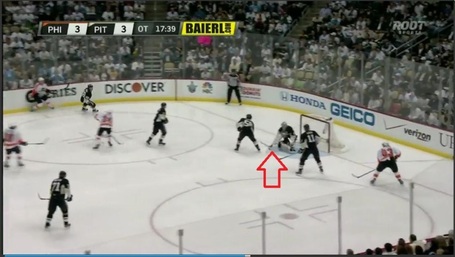 Letang tries to control the puck on his backhand but whiffs on it. MAFOMGBBQ has tracked the trickling puck and has initiated his post-save rotation (the chicken-wing looking thing in the next pic) to get square to the puck.As if the puck is made of tender mammal flesh, Voracek slashes toward Staal like a hungry velociraptor... 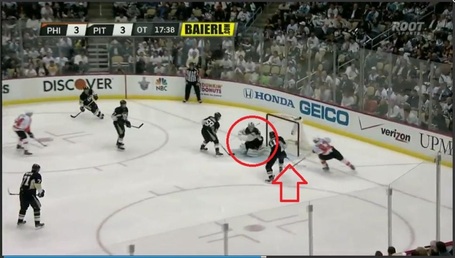 Staal O'Shits himself as he realizes what's happening and he tries to stick check Voracek. 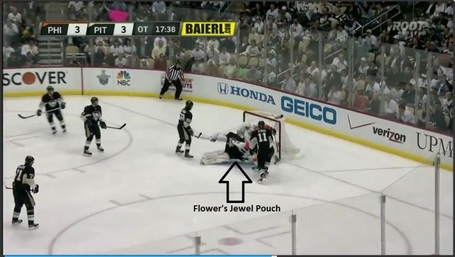 Desperate, Fleury pulls one of his patented full splits and his groin is rent asunder. Alas, it is not enough as the Czech skates through Staal's attempt at obstructing his path to the biscuit and bangs in the game-winner to complete the comeback. LL insists you don't call it that though. 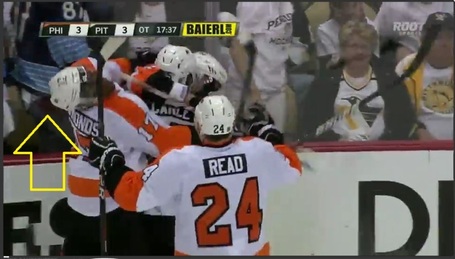 Jakub completes the celebration by high-sticking Wayne Simmonds in the face after he came off the bench. When the Flyers goon it up, they fucking commit. You have to respect that.