Share All sharing options for: Anatomy of a Playoff Goal: NJ vs. FLA - Goal 3

Now that the greater SBN hockey blogosphere has been exposed to the disease that is my humor and goal analysis, I figured I owed it to my new legion of fans to do another playoff goal breakdown. None of the goals from Monday night lent themselves to general snark and commentary so I jumped in the way-back machine to Sunday night's action. This time we're looking at would be the eventual game-winner for the They Still Have a Team in Florida Panthers - Nobody Knew the New Jersey Devils Were In The Playoffs game. Our action begins on a Florida rush into the Devils' zone in the last quarter of the 2nd period by the DeutschFinSwede line. 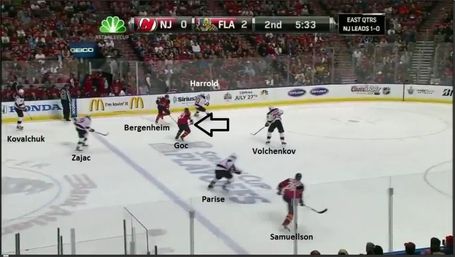 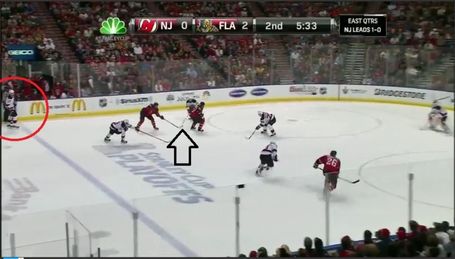 Bergenheim pulls his best seamstress impression and threads the needle to the streaking Samuelsson. Parise is trying to get the jump on the passing lane and snuff out the rush while Zajac and his surgically-repaired Achilles tendon follow the play. Harrold is not making a good impression as he is completely out of position on this rush. Likewise, Kovalchuck discusses his 401k with the ref. The large substance entering the right side of the screenshot is perennial hanger-on All-Star Marty Brodeur (#30). 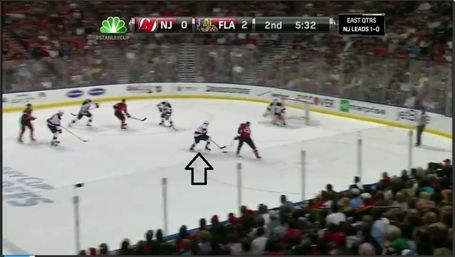 MHH Man Crush Parise aaaaaaaaaaaaaaaaalmost breaks up the pass, but Samuelsson deftly drops the pass back with a subtle stick move (he calls it a "Slick Sammy" which I think is a little too on-the-nose). 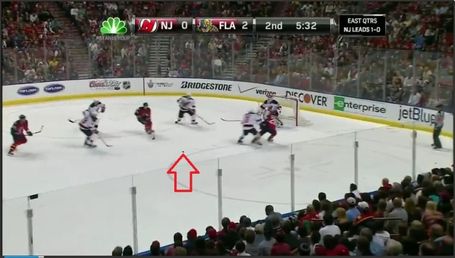 Goc swoops toward the Samuelsson droppings... 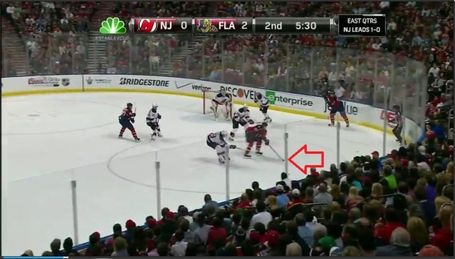 ...and gathers the puck as he heads to the near corner. New Jersey is in pretty good shape at this moment as Samuelsson isn't a scoring threat but is open to the cycle while Harrold and his Magic Crayon have made it back into position and have accounted for Bergenheim. Brodeur is in an upright post position as Goc carries the puck toward the bottom of the circle with Parise and Zajac bracketing the first-round (20th overall) center. 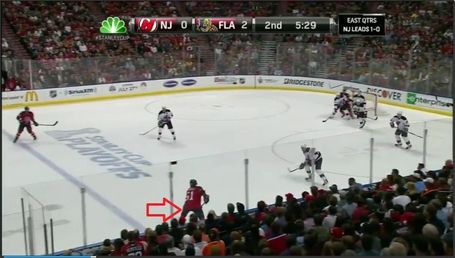 Goc chips a pass up the boards to playoff vet Brian Campbell (#51) at the near point. His partner, 30-point defenseman Jason Garrison (#52) occupies the other point and now Kovalchuk has a legit excuse to be involved in his team's end of the ice as he is charged with covering the 6'-2" blueliner. A mass of humanity begins to develop in front of the Devils' net. 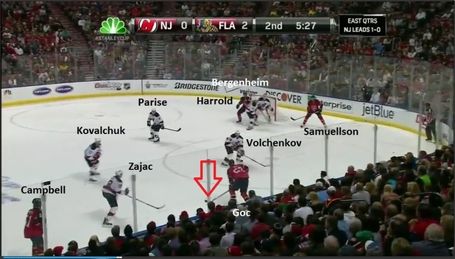 Zajac has pressured Campbell who returns the puck to Ze Goc as he curls up the boards. Volchenkov is taking away the obvious shooting line while Harrold and Bergy grind to MC Hammer's Pumps and Bump in front of the crease. Brodeur does his prairie dog impersonation. Samuelsson is drifting above the goalline for a possible redirect, but Volchenkov's stick is positioned just right (TWSS!). Kovalchuk heard they had a Rolex clearance sale in Section 115 and heads that way. 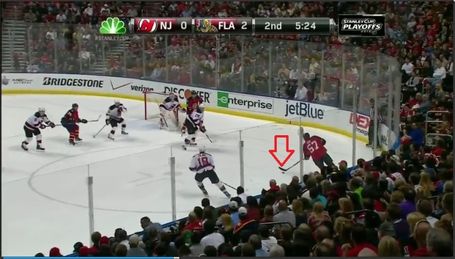 The wall of human flesh in front of Brodeur shifts as Goc carries the puck low. Parise gives Bergenheim a little tap-tap-tappy in the slot and the rest of the Devils' are in pretty good position as they outnumber the Panthers 4-to-3. 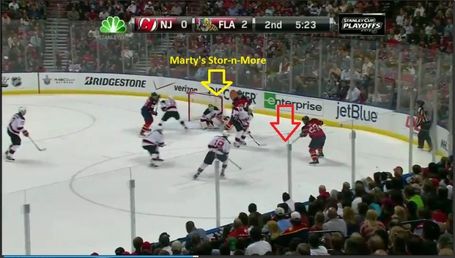 With no really good option thanks to Zajac angling to take away the pass back to Campbell, Goc elects to put a shot on net through the screen. Brodeur goes paddle-down exposing the top shelf on the short side. Kovalchuk has decided that 4-on-3 is unfair so he has drifted into the slot to make it a 5-on-3 party! Dude I've Never Heard Of is doing a pretty good job on Bergy in front of the net. 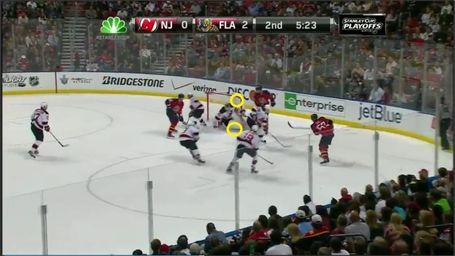 Marty is showing a lot of net for a shot he can't see as his paddle-down post position has deteriorated into Swiss Cheese. I think he's shrugging the left shoulder/elbow as the shot is higher than he anticipated. 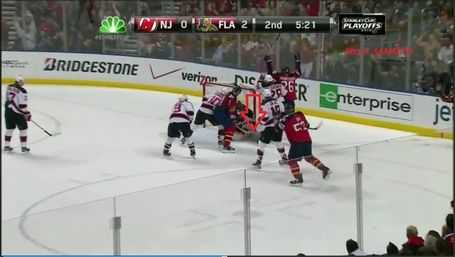 It appears that the the puck drops in behind Brodeur and Samuelsson raises his hands cuz he's Sure. I don't like Kovalchuk's body language here. It's defeatist. Brodeur closes his eyes and holds his pose hoping he can sell it for a quick whistle... 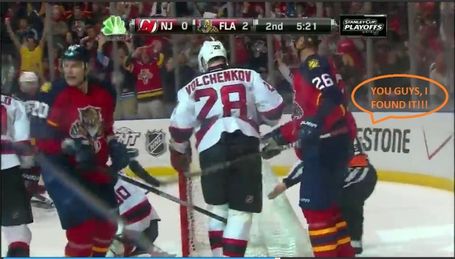 ...but the ref ain't buying that ocean-front property in Arizona. Samuelsson appears to be giving Marty some tips on positioning while Bergenheim sheepishly removes his stick from twixt Volchenkov's volchenkovs. 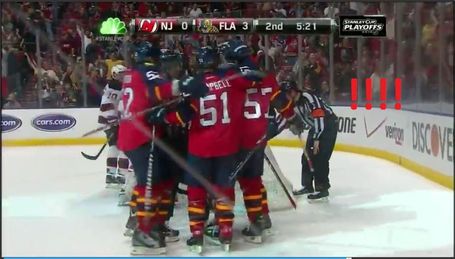 Group Hug!!!! The ref is adamant that this call be made correctly as he would continue to emphatically point at the puck in the net for like the next twelve minutes. I think it was a little show-boaty on his part, TBH. 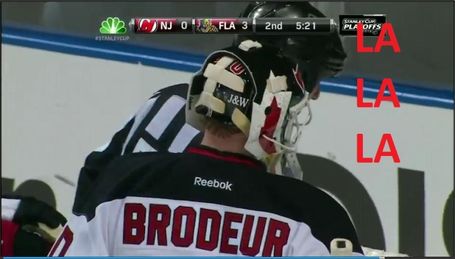 But wait! Captain Record-Breaker thinks this goal should not be allowed. Why? Because he's Marty Fucking Brodeur, that's why! El Referee-o gives him the cold shoulder explaining that a puck in the net before a whistle is by definition a goal. 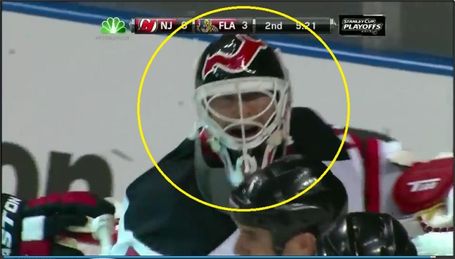 So much pain and shame in those eyes. That. Is. A disturbing image.