Share All sharing options for: Anatomy of a Goal: COL vs CAL - Goal 3

My inbox is exploding with demands for yet another one of my gripping looks at one of the goals from the most recent Colorado Avalanche game. On today's menu is a look at the latest (last?) goal from el capitan Milan Hejduk. This one is from the 2nd period of Saturday's game against the Calgary Flames. So without further comment, opinion, or trolling, I offer the following: 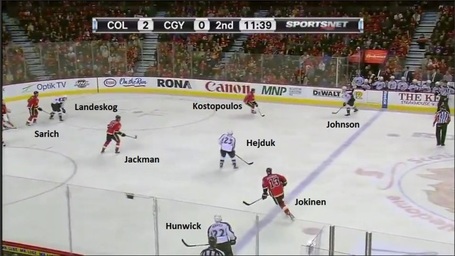 With just under 12 minutes remaining in the 2nd period, the puck slides over the the right side point for stud d-man Erik Johnson. He's partnered with the always rated Matt Hunwick. The Avs have rolled out a bit of a Frankenline featuring so-cute Matt Duchene (off camera at the moment) on a line with dreamboat Gabriel Landeskog and Old Man Logan Milan Hejduk. The Flames of Calgary have responded with a defensive pair of Cory Sarich (#6) and old-friend Scott Hannan (#23). Up front they sent out the over-30 glee club of Tim Jackman (#15) and Tom Kostopoulos (#16) centered by just-plain-old Olli Jokinen (#13). The venerable Miikka Kiprusoff is in net. FUN FACT: Everybody on the ice for Calgary is 33 years old, except Jackman (30) and Kipper (35). Average age for the Calgary skaters on this shift? 32.4. Colorado's skaters on the ice? 25.2. Yikes! Regardless, the Flames defensemen are in sound position, Jackman and Kostopwiththevowels have marked their guys, and Jokinen is circling back into the zone. Duchene and Landeskog are down low and bracketing the net. 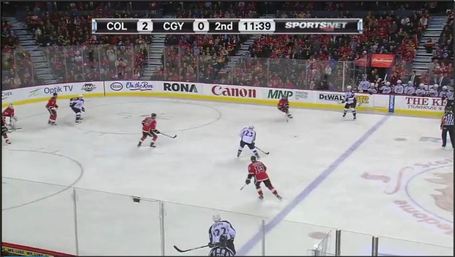 As Tommy K drifts toward Johnson, he makes a quick pass to Hejduk thus completing the first step of a give-and-go. Jokinen appears interested in participating in this play. 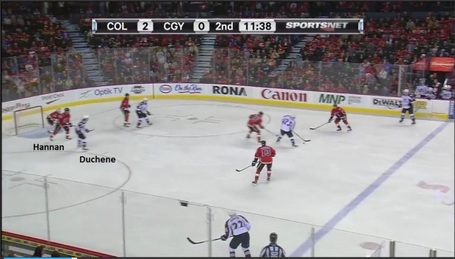 Hejduk has used the smell of Old Spice to draw in Kostopoulos and Jackman. He then sends a return pass to Johnson. Jokinen still thinks he will do something meaningful in this sequence. 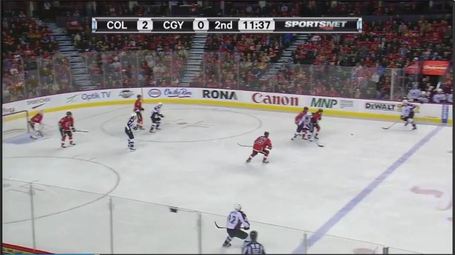 Step two of the G&G is complete as Johnson skates into Hejduk's pass and begins to drive down the boards. Note that this pass has compressed the defensive zone by half as all of the Calgary players have shifted to the far side play. Jokinen begins to get confused. 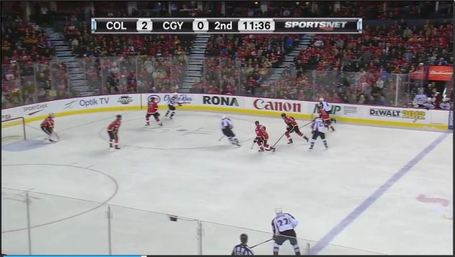 Now everybody is racing toward the face-off circle like they're giving away tickets to Cirque de Soleil. Kostopoulos tries to stick check Johnson as he drives down the boards, but Erik thinks nothing of it. Landeskog and Duchene have both opened up for a potential pass from the defenseman while Hunwick checks the flex on his stick. Hannan has completely let Duchene go at this point as there is essentially nobody on him. Jokinen wonders what he should be doing right now. 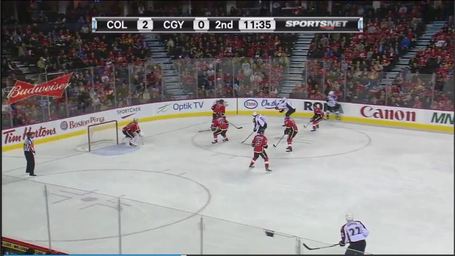 Landeskog and Johnson switch places as Sarich moves over to cut off EJ's path to the corner. Johnson completes a nifty back pass (NO BACK PASSES!!) to Landeskog who is moving up the boards. Note the defensive coverage here: 5-on-3 and the d-zone is compressed to a quarter of the offensive zone. Hejduk and Hunwick could be raping and pillaging like Vancouver fans and the Flames on the ice would be oblivious. Why isn't Hunwick driving to the far side of the net? Because that would put Hejduk on an island with 3 Flames higher than the puck, that's why. Jokinen thinks it's time to stop, collaborate, and listen. 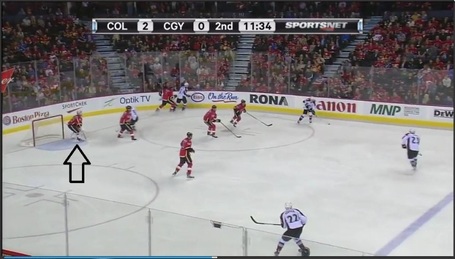 Landeskog matriculates up the boards as Sarich takes fellow #6 Johnson into the corner for a stern talking-too. Duchene has curled to the top of the crease and it appears that Kipprusoff is fighting the traffic in an effort to find the puck. Jokinen notes that Ice is on a brand NEW mission! 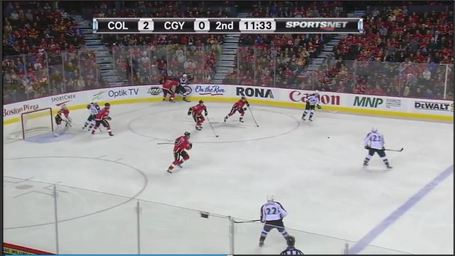 Landeskog slides the biscuit toward Hejduk at the point while the Calgary forwards enter chase mode. Duchene is getting to the top of the crease to set up his screen as Hannan tries to occupy space to restrict his lane. Hunwick is watching this beautiful ballet unfold before his innocent eyes as Jokinen notices that the Avs are not, in fact, shorthanded on this play. 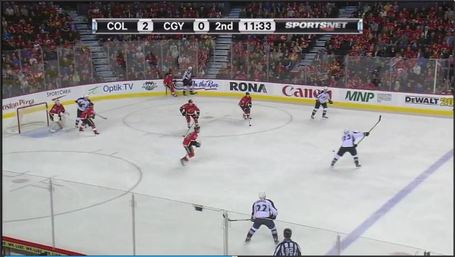 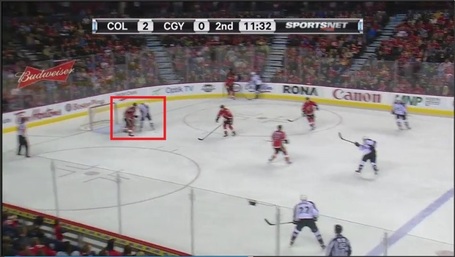 None of the Flames can get to the shooting lane as The Duke uncoils a slapper. Duchene has suckered Hannan into helping him bracket his goalie with a suffocating screen. Man, nobody fills space (on a roster or a salary cap) like Olli Jokinen. 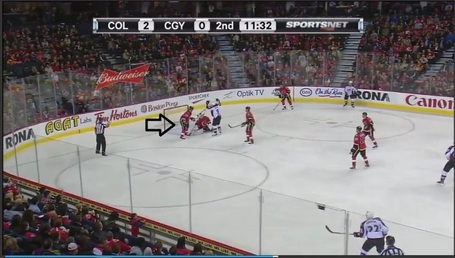 Kipprusoff is too busy digging out $5 to pay admission to the gun show as Duchene flexes in front of him. Jokinen and the rest of the Calgary players appear confused even though there is a giant arrow pointing to the puck clearly in the back of net. 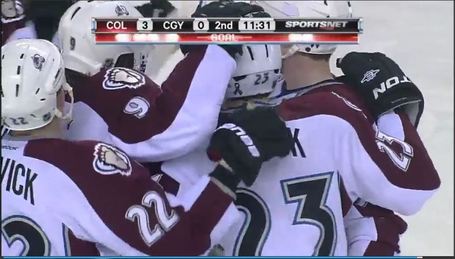 Everybody hugs. Hunwick has dainty wrists.