Share All sharing options for: Anatomy of a Playoff Goal: NJ vs. PHI - Goal 3

I tried, you guys. I really did. I didn't want to break this one down. Honestly. But then I thought of all of you out there waiting to hear me explain how this could happen and I felt that I needed to suck it up, put my own personal feelings aside, and breakdown this goal for the good of the hockey community. What can I say, I'm a saint.

If you haven't seen this one you must not have the internet. And if you don't have the internet, stop looking into your neighbor's window to read this blog. Restraining orders are serious business and are not to be taken lightly. I know we're awesome but nobody likes a peeping Tom. Or a peeping Dario. 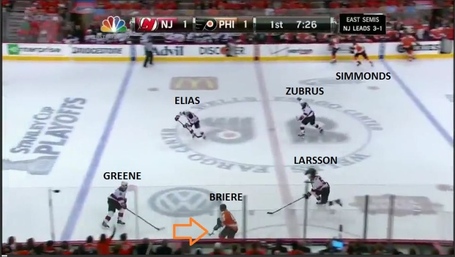 First period, Game 5, the City of Brotherly Love. Playoff wunderkind Danny Briere (#48) is carrying the puck into the Flyers' offensive zone as his linemates change on the fly. AJ's mancrush Adam Larsson (#5) follows closely behind as his defensive partner Andy Greene (#6) takes up a solid position for the Devils. Patrik Elias (#26) is coming over to help out on the backcheck. 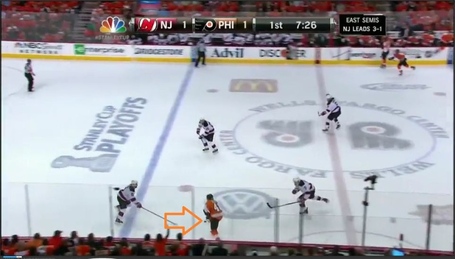 He goes for option #1, the ol' chip-n-chase, probably since Elias has the speed to close the gap and Greene is in good position to put him into the wall. 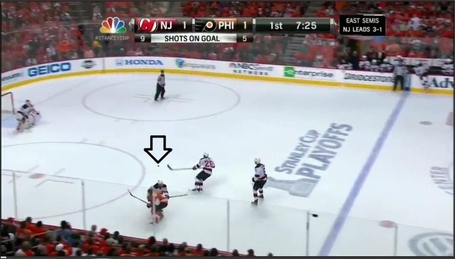 Greene sets what I'd categorize a "soft pick" and Briere goes down like a virgin: awkwardly and complaining. 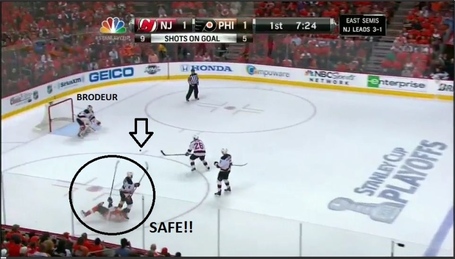 Elias swoops toward the net to pick up the now free puck as Dunkin' Donuts aficionado Martin Brodeur sculls out to set up the puck. 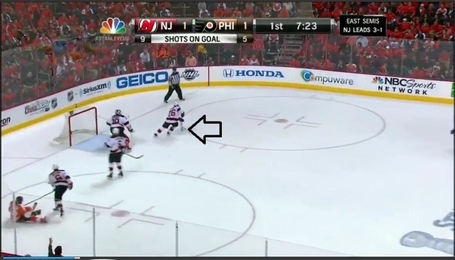 Elias picks up the biscuit (Which is hard to do when Marty has it within reach. I'd hate for Patrik to lose any fingers from dem chompers!). He then curls up the far boards to start the breakout... 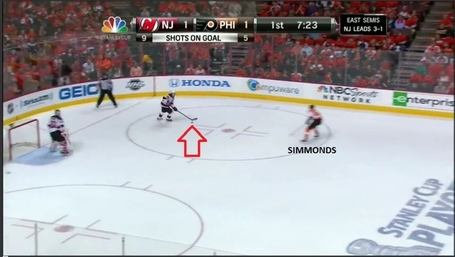 ...but that Wayne Simmonds guy (#17) is there applying solid forecheck pressure! 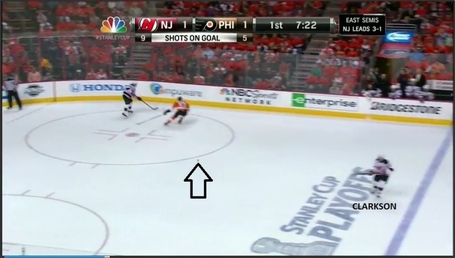 Elias decides to go with Option #2 as he sends a little sauce to Clarkson. 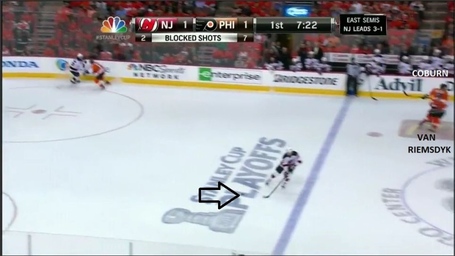 The pass is juuuuuuuuust a bit outside Clarkson's reach and the puck slides into the neutral zone. 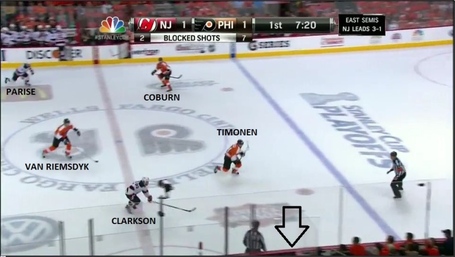 Now Clarkson and Philadelphia defenseman Kimmo Timonen (#44) are in a footrace for the puck as it approaches the Flyers' blueline. Timonen has a good angle and speed and should have an easy pick-up. His defensive partner is Braydon Coburn (#5) at the top of the screen. He appears to be stuck in reverse. 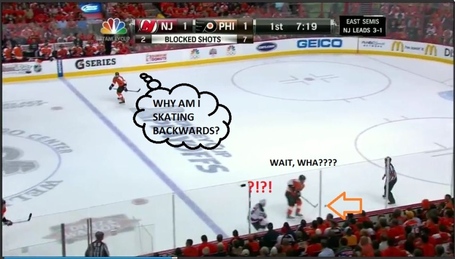 As expected, Timonen wins the race and has a stride on Clarkson while also having the puck on his forehand (facing the boards) . He too has several options, ranging from safe to self-castrating. Let's run those down: 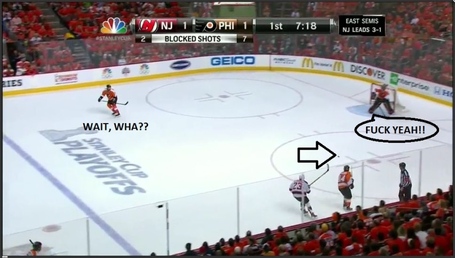 To his credit, Bryz is fucking psyched to get this pass! He's ready, steady, and sittin' on go, bitches! Honestly, someone needs to check Coburn's tranny cuz I seriously think he doesn't know how to skate forward. 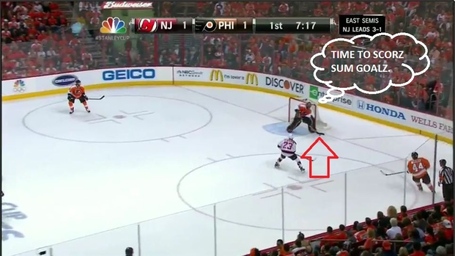 He sets the pass, gets the always-appropriate-for-finesse-stick-handling-maneuvers goal stick ready and weighs his options:

Once again, I'm sure you noobz thought he was gonna take one of the first couple of options. But a real pro likes to challenge himself when the score is tied in an elimination game so he of course chose #13. 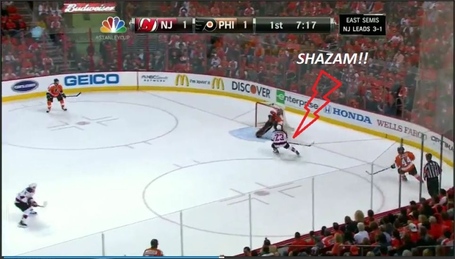 SHAZAM indeed. The puck hits Clarkson's stick (because why would a forechecker try to use his stick to break up a pass?) and goes to the safest place for official NHL pucks this postseason: the warm, inviting gap between Bryzgalov's legs. It makes complete sense when you think about it. The puck needs a break sometimes and it knows the easiest way to get comforted by the soft, supple hands of a linesman like Steve Miller is to head toward the black five hole beneath the Russian netminder. 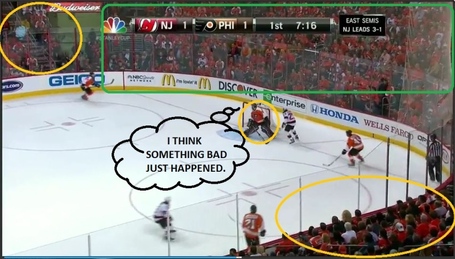 Like a caring mother Bryz looks back to make sure his baby black duckling is tucked safely in the goal. That or he needs some adult undergarments. The areas in yellow circles represent the parts of the arena that have not yet realized the horror of what they've seen (the goal or the need for adult undergarments, take your pick). The green box represents a growth industry for post-traumatic stress disorder treatments. 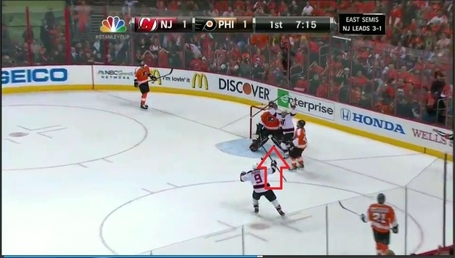 Clarkson gets his second game-winning goal of the post-season. Ohh, my bad SPOILER ALERT: That's the game-winner and series clincher, folks. 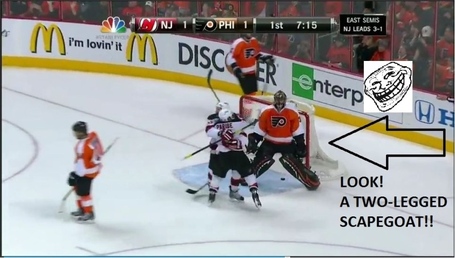 The universe nearly collapses under the weight of sportswriters around the world banging away at their keyboards simultaneously as the all pound out SCAPEGOAT but all mysteriously spell it BRYZGALOV. 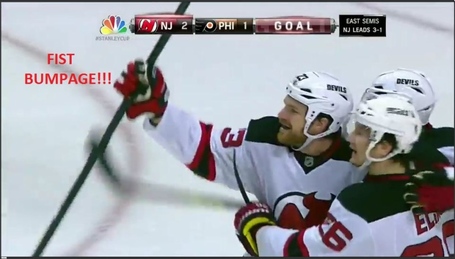 Clarkson celebrates with his bros... 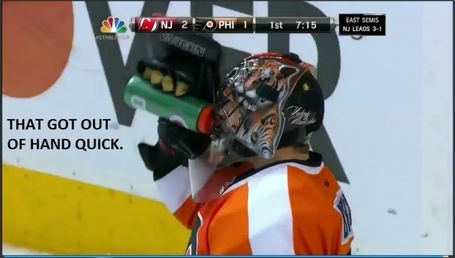 ...while Ilya wishes his fallback career as a cosmonaut was still viable.