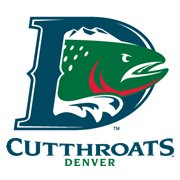 Denver welcomes the Central Hockey League's newest team: the Denver Cutthroats. Per the official press release, Adrenalin (the local company that designed the logo) wanted to incorporate specific Colorado characteristics into the logo, including the trout, mountains and rivers in the Rockies.

The Cutthroats will bring professional hockey back to the Coliseum for the first time in 13 years, hosting 33 regular season games. The team’s colors consist of green, blue, red, and white, and the team took its name in honor of the state fish of Colorado – the Greenback Cutthroat Trout.

"It’s a great looking logo that really incorporates a lot of what the state of Colorado is about," said head coach Derek Armstrong. "Colorado has always been an active state with beautiful scenery and the logo focuses on that between the Cutthroat Trout, the mountains, the water, and the colors. There’s no other logo like it in hockey."

The team's official Facebook (facebook.com/DenverCutthroats) and Twitter (@DEN_Cutthroats) pages have been set up, and the team's website (http://www.denvercutthroats.com) will be up and running later this summer.

Fans can now reserve their place in line for full-season ticket packages with a deposit of $50. Season tickets start as low as $15 a game and the deposit will provide customers with a priority number for the team’s "Select-a-Seat" event, scheduled for early August in the Coliseum. A seating map can be viewed on the team’s temporary denverchl.com website.

Call (303) 295-FISH (3474) to place your deposit now and lock in your priority number. Numbers will be issued on a firstcome, first-serve basis.

Seating levels, season ticket and game day prices have been finalized for the team’s upcoming season. Four of the five available seating sections will be open for full-season ticket packages starting with Lower Bowl seating for $499. Lower Prime seating begins at $749, packages in the Cutthroats Club start at $899, and glass seating packages cost $1,199.

Season tickets are not available in the Lower End Zone sections.

The team’s regular season schedule will be released later this summer.