Joey Hishon back in training

Share All sharing options for: Joey Hishon back in training

Joey Hishon, the Avs' first round pick in 2010, is training again per recent Tweets. 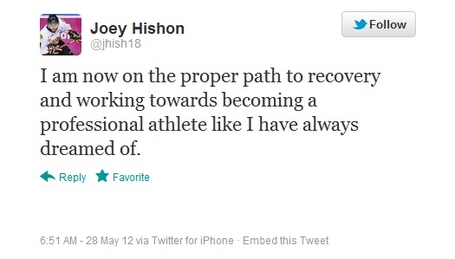 Hishon suffered a severe concussion during the 2011 Memorial Cup playoffs as the result of a vicious elbow to the head by Brayden McNabb. While McNabb received only a one-game suspension, Hishon was sidelined for over a year with symptoms that would get better only to turn for the worse again. For the most part, Hishon has been quiet about the injury and his recovery process. Therefore, not only is the content of his Tweets reason to be hopeful for next season, but the fact that he is Tweeting with such regularity should add to that optimism.

The young center credits the addition of hyperbaric oxygen therapy for his recent improvements. At the suggestion of friend Andy McDonald of the St. Louis Blues, Hishon began hyperbaric oxygen treatments at Sara's Garden in Wauseon, Ohio. The treatments focus on saturating the body's tissues with oxygen, which is said to have healing properties. Because of the manner in which the oxygen is dispersed through the body, areas in which blood flow is compromised can still receive the positive benefits of oxygen.

It will take time and hard work for Joey Hishon to get back into the condition he needs in order to be competitive at the pro level again. Given his dedication to the game and impressive work ethic, we may get to see him back with the Lake Erie Monsters next season.

This is great news, folks. We wish Hish all the best and hope for a quick and productive recovery.