Another Look at the Horrible Avalanche Offense

Share All sharing options for: Another Look at the Horrible Avalanche Offense

Cole took a look at the leading scorers and the historical performance correlation between them in his first piece this week. Then he looked at who can fill the overwhelmingly obvious top-scorer gap on the Avalanche team. One of the questions raised was secondary scoring as it related to that gap. I've attempted to take a swing at that question (and others) with my breakdown below.

What this table shows is the teams ranked by GOAL scoring. Pittsburgh was number one and the lowly Obviously Playoff Contender fellow Northwest Division occupant Wild came in last. Colorado came in tied for 24th with 199 goals. Next to each team is their top three scorers and the percentage of the team's goals for which they accounted. For example, Ottawa's top scorer was Milan Michalek who had 35 goals which was 14% of the Senators' 243 regular season goals. Jason Spezza was second on the team with 34 goals (another 14% of the team total) and together they accounted for 28% of the goals scored for Ottawa. Daniel Alfredsson had 27 goals (11% of the team total) to rank third on the team and the top three together accounted for 40% of Ottawa's goals. For the Burgundy and Frostbite Blue Gabriel Landeskog lead the team with 22 goals, Paul Stastny was second with 21 goals, and $4 million-man David Jones was 3rd at 20 goals. Each of those guys accounted for 10-11% of the goal output and between the three of them were responsible for nominally a third of the team's puck/goal matchmaking. 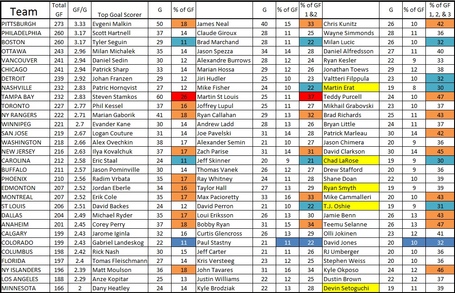 Now is the part of the analysis where I go crazy with assumptions, a complete lack of statistical integrity, and the cell fill options in Excel. First up, take a look at Steven Stamkos' numbers (the red box). Good Lord. He accounted for OVER 25% of the Lightning's goal announcements. The combined might of the Avalanche's top offensive players last year BARELY trumps his total. The diminutive-yet-productive Martin St. Louis was next on his team with 25 goals which was 11% of the team's output. Between them they accounted for over a third of the team's 232 goals. I mention them specifically because they are the definition of outlier due to the number skewing caused by Stamkos' output.

The next topic is the orange boxes which represent leading scorers who account for a high percentage of their team's goals. For the leading scorer list, that range fell off steeply after Stamkos' season. 16-18% was the completely arbitrary range I set for the top heavy goal scorers. A pretty good sprinkling of playoff teams there (Pittsburgh, the Rangers, New Jersey, Phoenix, and Montreal) but also a couple of also-rans like Matt Moulson on the Islanders, Corey Perry in Anaheim, Jordan Eberle in Edmonton, and Phil Kessel in Toronto. So I think it's pretty safe to say that having A GUY carry the team isn't the sole ingredient to success. It doesn't hurt, but it isn't an overwhelming contributor.

When you carry that thesis through to the 2nd and 3rd scorers and the combined percentages, the correlations between star output and success are stronger as the Penguins, Rangers, Devils, and Canadiens all had success with three guys carrying about a third of the load between them. Interestingly, the Ducks stay relevant to this discussion since Perry, Bobby Ryan, and Teemu Selanne carried about half of the team's load and didn't have jack to show for it at the end of the season (Dallas' top trio wasn't that far off a similar pace FWIW). Also note that San Jose's top three make an appearance as Logan Couture, Joe Pavelski, and Patrick Marleau were good for 42% of the Sharks' goals though none of them individually carried more than 14% of the load. Basically, having a top heavy line is OK in terms of playoff contention as long as they produce in the ~85+ goal range as a group, Anaheim notwithstanding.

And now the horrible Avalanche Discussion (dark blue boxes)! The Avs were tied for DEAD LAST in production by #1 scorer as illustrated by Landeskog's 11% contribution. Who were they tied with? Great question: Perennial playoff contender and 2011 Cup Champ Boston and desperately-need-a-rebuild Carolina (light blue boxes). In fact, look across the board for those three teams. The each had three guys total up to account for about a third of the teams' output. Again, you'd expect a strong correlation between the numbers for early golfers like Colorado and Carolina, but the scoring by committee approach didn't hamper Boston until they made the post-season. The difference was Boston's committee scored 20 more goals than Carolina's or Colorado's. See the last sentence in the previous paragraph. Other light blue boxes represent St. Louis and Nashville, two teams that rely heavily on a defense-first mentality throughout the lineup which may have hampered the contributions of their more productive players.

TLDR VERSION: You don't NEED one guy doing most of the work, but it typically doesn't hurt. Contrary to that, you also don't NEED to spread the load around among your top three guys, but it typically doesn't hurt. What does hurt is if your top three guys don't get upward of 80 goals between them. Then you're pretty much screwed unless you're relying on a stifling defense/stout goaltending (PHX, STL, NSH, DET) or playing in a really weak division (VAN, WSH, FLA).