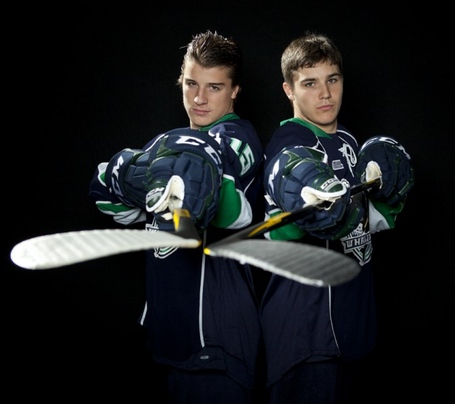 With #41, the Colorado Avalanche use their 2nd round pick on Mitchell Heard, of OHL Plymouth (which is where Garrett Meurs is). He is on the Twitter (@Heardy15), Cheryl tells me.

Heard is a 20-year old center who had been in camp with Toronto as an undrafted player but they declined to offer a contract. Last year he amassed 29 goals and 28 assists, including 111 PiM as a 19-year old in the OHL. He also was 4-7-11 in 13 postseason games. He clocks in at 6'1, 190, is a left-handed shot and was undrafted at junior, he actually headed to Plymouth via free agency. Here is a bio from the Plymouth Whalers site:

Aleardi isn’t the only Whaler player who wasn’t rated by Central Scouting but will go to Pittsburgh. Mitchell Heard will be attending the draft with his agent in anticipation of being selected in Pittsburgh.

Although Heard’s NHL status is similar to Aleardi, he gets the job done on the ice in a different way. Need a faceoff win? Heard was named the Best on Faceoffs in the Western Conference Coaches Poll. Need a goal scored? Heard enjoyed a career-best 29 goals with 28 assists for 57 points in 58 games last season. Need someone to drop the gloves? Heard cheerfully led the Whalers with 12 fighting majors last season.

When playing at his best, Heard skates with an edge that can be effective in all areas of the ice.

Heard also had meetings with several NHL teams over the course of last season.

And like Aleardi, Heard can return to the Whalers in 2012-13 as an overage.