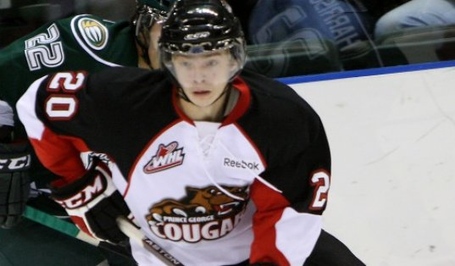 With their #72 3rd rounder, the Avs pick a small forward in Troy Bourke, of WHL Prince George.

Central Scouting ranked him 123rd in North America. He clocks around 5'10 180, which is bulkier than some other outlets have him listed, according to TheHockeyWriters.com. That same article also insinuates his stats were deflated by playing on a team that wasn't very good, compares him favorably to a Zach Parise type player who can be useful in any situation, and mentions that he scored a point per game for Canada at the U-18s. Bourke appears to have a good shot and very good skating, with a good amount of hockey sense too. He's just not very big.

He scored 18 goals and 38 assists for Prince George last season and displays leadership qualities, so there's your "character" stuff that Pracey and Sherman like. And according to the Avalanche Twitter, he's been drafted by his favorite team growing up.